The Holodomor-Genocide in the Ukraine

Since we were discussing genocide yesterday because of Armenian Genocide Remembrance Day, I'd like to mention another one, the Holodomor, the genocidal attempt by the Soviets under Stalin to destroy the Ukrainian Nation. 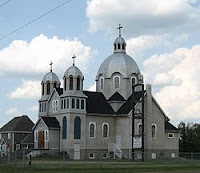 I lived in Edmonton, Alberta which is often jokingly called 'Edmondchuk' from the large number of ethnic Ukrainians in the city and the Province of Alberta. When I was living there, the Premier was a man named Ed Stelmach. He was a farmer, born in Lamont, AB. Lamont is a village near Edmonton where I've spent a good deal of time. It used to have two Catholic Churches, a Latin Rite Church
and a Ukrainian Greek Catholic Church right), but the Latin Bishop ended up closing his Church, because there weren't enough people attending it.

Stelmach had learnt Ukrainian as his 'milk language' and only learnt English when he went to school. Thus he spoke English with an Ukrainian accent. During one election campaign an operative of one of the opposition parties thought it would be funny to tweet a joke about Stelmach's accent. Big mistake! There was such an outcry that said operative was out of a job in a few hours.

The very first memorial in the world to the victims of the Holodomor is in Sir Winston Churchill Square in Edmonton (right). I have often visited it and recited Вічная Пам'ять, Memory Eternal, as a prayer for the victims. It has been followed by many others around the world. Here's a gallery from Wikipedia of examples of some of them. Holodomor Memorials.


Estimates of the death toll vary widely, from 2.4 million to 12 million, in part because the Reds kept no records and in greater part because the Communist regime continued denying it until the fall of the Evil Empire.

Despite Russia's continued down playing of it and Russian nationalists outright denial that it happened, it is considered genocide by 16 countries, considered as a criminal act of the Stalinist regime by 6 countries, and considered a tragedy or crime against humanity by 5 international organizations. The complete list can be read here.

Here is a film, produced by the Ukrainian Canadian Research and Documentation Centre in Toronto, ON.

And here is the complete transcript of the video, Harvest of Despair - Great Famine in Ukraine 1932-33.
Posted by Jovan-Marya Weismiller, T.O.Carm. at 00:20