One of Francis' toadies. He fits right in with the communist heretic in the Vatican who claims that ‘China Is the Best Implementer of Catholic Social Doctrine'.

From Katholisch.de (Translated by Google) 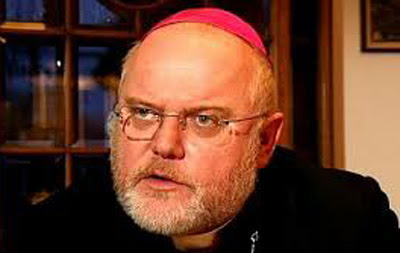 On May 5, Karl Marx would be 200 years old. On this occasion, Cardinal Reinhard Marx spoke about his namesake and praised him. The Communist Manifesto "impressed him", according to Marx.

The Munich cardinal Reinhard Marx sees in his namesake Karl Marx an important corrective of the capitalist system. "Prosperity and profits are not everything a society can orient itself to," said the chairman of the German Bishops' Conference in an interview with the "Frankfurter Allgemeine Sonntagszeitung". The market does not automatically lead to a fair society.
The Communist Manifesto "impressed him", according to Marx , also because it was "written in a great language". And Marx's analyzes also contributed decisively to the emergence of the Catholic social doctrine . One need not celebrate the 200th birthday of Marx in the coming week, added the cardinal: "There is no reason for me as a Catholic bishop, but we should commemorate."
The cardinal deplored "enormous social inequalities and ecological damage that capitalist dynamics are answerable to". That this has improved is "not an achievement of capitalism, but the result of a struggle against these excesses." This insight was also due to Karl Marx : "The market is not as innocent as it appears in the textbook of economists, behind which are powerful interests."
"One of the first serious social scientists"
The Bishops' Conference Chair warned against looking only at "material improvements". You also have to see "who bears the burden and who loses." Karl Marxhas shown that "human rights remain incomplete without material participation," said the Munich archbishop. Marx made it clear that "to pay attention to the real conditions" was. With the emphasis on empiricism he was "one of the first serious social scientists".

For his 200th birthday, the cardinal would like to ask his namesake if he is annoyed by what people have done with his ideas. In the end one could indeed "historically not separate a thinker from what others have done later in his name", especially if it had bad consequences. But he does not blame Karl Marx for the crimes of Stalinism .
No "direct connection" to later Marxism-Leninism
Although there are in his writings "one or the other totalitarian thought" as the collectivism, which does not respect the individual. But Karl Marx can not bring direct connection to the later political Marxism-Leninism or even to the Soviet penal and labor camps , according to Cardinal Marx . Freedom is indivisible. "Economic freedom without political freedom does not work"; there could him China "does not convince them otherwise."
Marx also drew a line on current right-wing populism and xenophobia. Their roots are also in a new social split. "If people feel that society no longer offers equal opportunities, then it can be politically dangerous." Where only economic growth is in view and not the interests of all, according to Marx , social cohesion dissolves. (CBA)
Posted by Jovan-Marya Weismiller, T.O.Carm. at 14:56