The Little Office of Christ the King (For Private Use)

I compiled this 'Little Office' over 15 years ago, for reasons explained in the post. The entire Office is at the link. 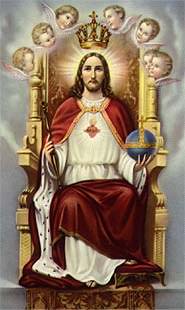 This Little Office of Christ the King is modelled after the pre-Vatican II "Little Offices" of devotion. They consisted, basically, of the opening verses of the Breviary Office, a portion of the Hymn(s) of the Feast, a versicle and response proper to the Feast and the Collect of the Feast.I have compiled this for two reasons:A) Because I would like all my readers to pray for the Instauration of the Social Reign of the Sacred Heart of Christ the King, and this is an excellent way to do that, andB) Because the post-conciliar Church has emasculated the doctrine of the Social Reign and has written insipid prayers reflecting the watered-down doctrine taught. They pray that Christ may reign as King in our Hearts, whereas the Traditional Liturgy prays that he may literally reign, in our states, our societies, our schools and our families.Here is a selection from Michael Davies' "The Reign of Christ the King", which explains the Traditional doctrine:

The Universal Rights of Christ the King
In his encyclical, Quas Primas, Pope Pius XI reaffirmed the unbroken teaching of his predecessors upon the papal throne that states as well as individuals must submit themselves to the rule of Christ the King. In affirming this fundamental truth of our faith, Pope Pius was not referring simply to Catholic nations, or even to Christian nations, but to the whole of mankind. He cites from the encyclical, Annum Sacrum of Pope Leo XIII:

The empire of Christ the King includes not only Catholic nations, not only Baptized persons who, though of right belonging to the Church, have been led astray by error, or have been cut off from her by schism, but also all those who are outside the Christian faith; so that truly the whole of mankind is subject to the power of Christ.

The separation of Church and state was condemned unequivocally by the Roman Pontiffs until the Second Vatican Council. The Church's teaching is that the State has an obligation to render public worship to God in accord with the teachings of the True Church, the Catholic Church, and positively to aid the Catholic Church in the carrying out of her functions. The state does not have the right to remain neutral regarding religion, much less to pursue a secular approach in its policies.No one claiming to be a Christian would, one hopes, dispute the fact that as individuals we must submit ourselves to the rule of Christ the King, but very few Christians, Catholics included, and conservative Catholics among them, understand, let alone uphold, the Social Kingship of Christ.Strictly speaking, God alone has rights which belong to Him of His very nature. As human beings we possess only contingent rights, rights which are accorded to us by God. We have a right to do only what is pleasing to God. The fundamental meaning of the word, "liberty," is the ability to act without constraint.Again, citing from Pope Leo XIII:

The true liberty of human society does not consist in every man doing what he pleases, for this would simply end in turmoil and confusion, and bring on the overthrow of the State: but rather in this, that through the injunctions of the civil law all may easily conform to the prescriptions of the ETERNAL LAW.

Christ is the Ruler of the kings of the earth and He must Reign!Opportet illum regnare!

✠✠✠✠✠
The entire booklet may be read at Virgo Sacrata.I hope that this will be edifying and that many of my readers will print out what it contains and pray the Little Office and that my fellow Trad bloggers will link to this blog. (Mr James Sullivan has created a PDF document for ease of printing, available here).The entire propers of the Feast are at DivinumOfficium. Just click on Ordo and go to the last Sunday in October.Here is a traditional prayer to Christ the King, which is really an Oath of Allegiance to His Kingly Powers:
Prayer to Christ the King

O CHRIST, JESUS, I acknowledge Thee as Universal King.
For Thee, all creatures have been made. Do Thou exercise
over me all the rights that Thou hast.

Renewing my Baptismal Vows, I renounce Satan,
with all his works and pomps, and I promise to live as a
good Catholic: Especially, do I pledge myself, by all
the means in my power, to bring about the triumph of the
rights of God and of Thy Church.

Divine Heart of Jesus, I offer Thee all my poor actions to obtain
that all hearts may recognize Thy Sacred Royalty, and that thus the Reign of Thy Peace may be established throughout the entire world. Amen.

I have placed another wonderful prayer, expressing the Traditional doctrine of the Kingship of Christ, which may be read at the end of the Office as a commendation. Here is the link.
Posted by Jovan-Marya Weismiller, T.O.Carm. at 12:00