Today is the 103rd anniversary of the beginning of the Armenian Genocide, carried out by the Government of the Khalifat Rasul Allah, the Caliph of Islam. The Muslim Turks managed to kill 1.5 million Armenian Christians. 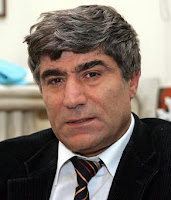 To this day it is a crime in 'Western, Enlightened, European' Turkey to deny the stark historical facts surrounding this heinous, inhuman crime. As an example of the attitude of the current Turkish Government toward anyone brave enough to mention the genocide,  Turkish-Armenian journalist Hrant Dink advocated Turkish–Armenian reconciliation and human and minority rights in Turkey and was critical of Turkey's denial of the Armenian Genocide. He was prosecuted three times f r 'denigrating Turkishness' under Article 301 of the Turkish Penal Code, whilst receiving numerous death threats from Turkish nationalists, and was ultimately assassinated in 2007.

Below are some pictures that illustrate the horror inflicted on the Armenian Nation for the simple crime of being Christian, for believing in Our Blessed Redeemer, Our Lord Jesus Christ.

Give rest, O Christ, to thy servants with thy saints: where sorrow and pain are no more; neither sighing but life everlasting.
Thou only art immortal, the creator and maker of man: and we are mortal formed from the dust of the earth, and unto earth shall we return: for so thou didst ordain, when thou created me saying: “Dust thou art und unto dust shalt thou return.”
All we go down to the dust; and weeping o’er the grave we make our song:
Alleluia, alleluia, alleluia. 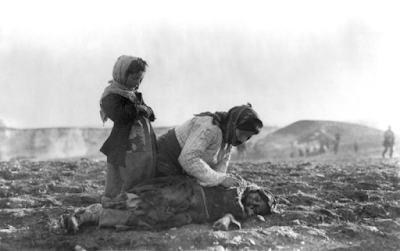 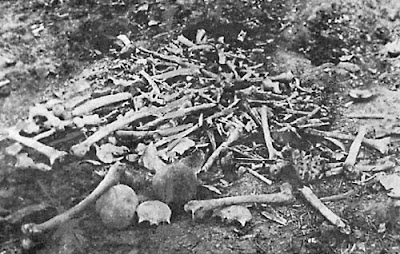 The remains of Armenians massacred at Erzinjan 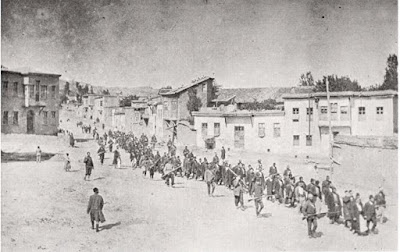 Armenian civilians, escorted by Ottoman soldiers, marched through
Harput (Kharpert) to a prison in nearby Mezireh (present-day Elâzığ), April 1915. 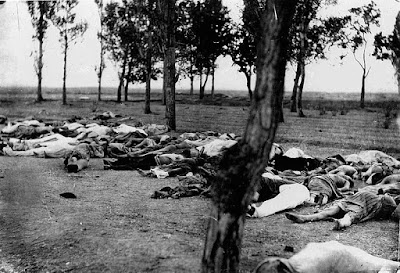 This picture is taken from 'Ambassador Morgenthau's Story', by Henry J. Morgenthau, Jr., Ambassador to the Court of the Caliph, detailing the genocide. His caption reads, '"Those who fell by the wayside. Scenes like this were common all over the Armenian provinces in the spring and summer months of 1915. Death in its several forms—massacre, starvation, exhaustion—destroyed the larger part of the refugees. The Turkish policy was that of extermination under the guise of deportation" 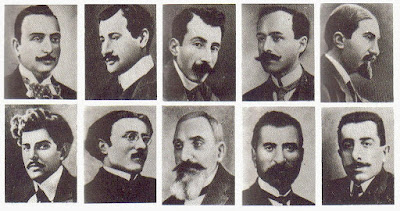 Some Armenian intellectuals arrested on 24 April 1915,
and following weeks, then deported and killed. 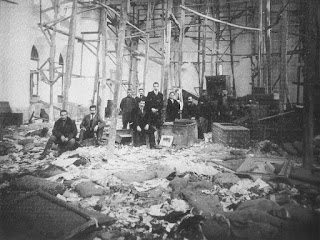 A 1918 photo of an Armenian church in Trabzon, which was
used as an auction site and distribution center of confiscated
Armenian goods and belongings after the Armenian Genocide. 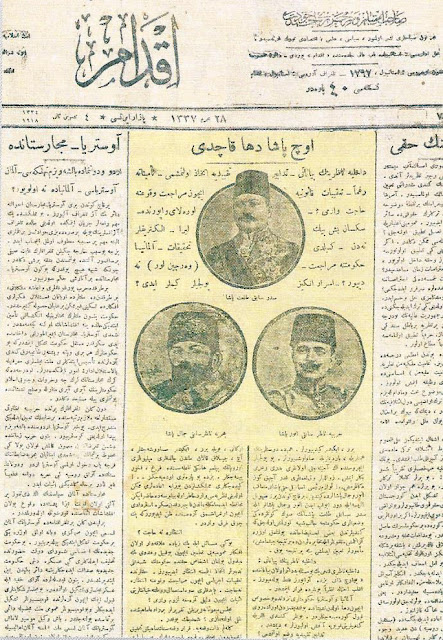 The front page of the Ottoman newspaper İkdam on 4 November 1918 after the Three Pashas fled the country after being indicted for war crimes against the Armenians and Greeks. It reads: "Their response to eliminate the Armenian problem was to attempt the elimination of the Armenians themselves. The 'Three Pashas' were  Mehmed Talaat Pasha, the Grand Vizier and Minister of the Interior (head of the police); Ismail Enver Pasha, the Minister of War; and Ahmed Djemal Pasha, Minister of the Navy.

But, the victims of the Muslim monsters are not forgotten! Armenian Genocide Remembrance day is observed by Armenia, the Republic of Artsakh, the State of California, Canada, Iran, Lebanon, and Argentina, as well as throughout the Armenian Diaspora. It would also be observed in the US except for Gerald R Ford's pandering to the Islamic successors of the perpetrators, which led to the defeat in the US Congress of a Resolution recognising it.

Here is the main Memorial to the victims on the hill of Tsitsernakaberd, in Yerevan. Every year on this day, hundreds of thousands of Armenians gather at the memorial to commemorate the victims of the genocide. The people who gather in Tsiternakaberd lay fresh flowers out of respect for all the people who died in the Armenian genocide. Over the years, a wide range of politicians, artists, musician, athletes, and religious figures have visited the memorial.