Electing Republicans is No Guarantee of Protecting Christian Values

An article from the Diocesan paper of my former home Diocese. In fact I lived cross the street from the Cathedral. Kansas is one of the solidest Republican state in the Union, and this is the support the 'Party of Family Values' which many Christians are duped into voting for every election, gives to real family values! 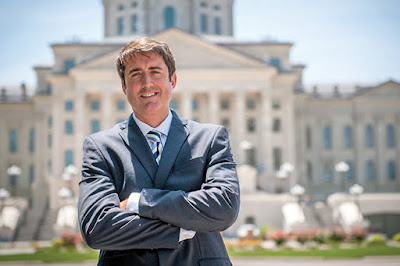 Michael Schuttloffel is the executive director of the Kansas Catholic Conference.

by Michael Schuttloffel
The Benedict Option,” written by Rod Dreher in 2017, was the most talked about book in Christian circles in at least 10 years.
Many of Dreher’s arguments about the extent to which Christians should “withdraw” from mainstream society continue to provoke sometimes heated debate, and not without reason. One of his claims, however, should strike anyone paying the least bit attention as patently obvious.
Surveying the tide of secularism washing over America, Dreher witheringly lampoons the idea that “there’s nothing here that can’t be fixed by continuing to do what Christians have been doing for decades — especially voting for Republicans.” Kansas is a case study in this reality.
On March 29 of this year, the Kansas House of Representatives voted down legislation (HB 2481) that would protect faith-based adoption providers like Catholic Charities from the fate that has befallen them in Illinois, Massachusetts, Washington, DC, and elsewhere.
In those places, government agencies forced Catholic Charities to close because of their policy of placing children only in homes where they would have a married mom and dad.
Because of this worrying trend, and because the ACLU — when not overly busy suing Catholic hospitals for not performing abortions — has begun casting its litigious gaze upon religious adoption agencies, seven states have passed laws protecting those agencies’ work.
Oklahoma seems poised to follow in their footsteps, but Kansas is a different story. Here, 27 House Republicans voted no on the bill.
Stunningly, four of the six members of House Republican leadership voted with the ACLU against Catholic Charities. Joining them were four Republican chairmen of major House committees.
Fortunately, the Kansas Senate acted first, and 28 out of 40 senators voted yes. However, the Senate floor debate was the scene of an ugly remark that you undoubtedly would have heard about before now had it been directed at any other group than Catholics.
There, Republican Sen. Barbara Bollier, after laying out a farcical understanding of what the “Catholic religion” believes about the seven deadly sins, took the mic again and called those beliefs “sick.” She closed by saying, “I know bigotry when I see it.”
None of this is to exonerate the Democratic Party, whose platform reads as a sort of anti-catechism for people who believe what the Catholic Church teaches about the human person. But the idea that simply pushing the red button instead of the blue one will elect people committed to protecting religious freedom is becoming more mistaken by the minute.
The Kansas House will have another chance to pass HB 2481 before May 4. Tell your representative to vote “yes.” Accept no excuses. Then mark Aug. 7 on your calendar, the date of the primary election. Find out how your representative voted on HB 2481 and choose accordingly.

And here is an article by Rod Dreher, mentioned in the opening paragraph above:
Why Christians Can’t Count On The GOP
Posted by Jovan-Marya Weismiller, T.O.Carm. at 22:56