Diary: Cars, Claret and the Constitution. The Passions of Jacob Rees-Mogg

This the man that I want to see as Her Majesty's Prime Minister. An unashamed Catholic, who votes his conscience, which is formed by the Teachings of Christ's Church, father of six, and a staunch monarchist. 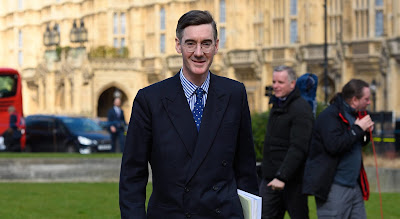 I interviewed Jacob Rees-Mogg about his passions at Five Hertford Street, the private members’ club, on Wednesday. There were a surprising number of them, and they all seemed to begin with the letter ‘C’.
The title of the interview was ‘What Makes Jacob Tick?’ and, in front of a large and appreciative audience, he told us. The first was Claret, of which he said – surely rightly – that drinking the 2005 vintage was tantamount to infanticide.
The next was Cricket, about which he is now less obsessive than when as a schoolboy he’d known the names of every player in the England and Somerset teams. When I teased him over his six Children, asking if he was trying to repopulate the planet, we got an erudite and witty mini-lecture on the faults in Malthusian demography, and the geometrical rather than arithmetical increases possible in the global food supply.
Cars are another passion; he owns a 1936 and a 1968 Bentley, and rhapsodized about their beauty in the manner a poet might about a sunset.
Charming, intelligent and witty, Jacob was far from the caricature of the ‘stern and unbending Tory’ put about by his opponents, although when it came to his Catholicism he was proud to say that on moral issues he took his guidance from the Vatican rather than the Government Whips’ Office.
Saints Thomas More and John Fisher are his heroes –  they share a Saints’ Day on 22 June, which I suspect is an important one in the Rees-Mogg calendar – who both died in 1535 for their faith. When it comes to voting on gay marriage, abortion and so on, Jacob will not be about to sacrifice his beliefs for political advancement.
This naturally brought us on to the central importance of the English Reformation to the Brexit movement, which has been mentioned by several writers recently, such as David Starkey and Victoria Glendinning, and which obviously underpins much of Britain’s ancestral sense of co-operative separateness from Europe. Jacob told us that the Statute in Restraint of Appeals (1533), the key legal foundation of the Reformation, was only repealed in 1969, in preparation for joining the Common Market four years later.
Which naturally brought us onto the next two Cs in Jacob’s emotional and political lexicon: Constitution and Country. In calm and measured tones, supported by statistic evidence, extensive quotation from what is clearly a capacious memory, and much impressive erudition, he laid out likely scenarios which would have any bitter Remainer foaming and fuming. With perfect loyalty to the Prime Minister, he explained how because the EU was essentially merely a Customs Union writ large, Labour’s plan to try to keep the EU in the Customs Union meant that it was trying to subvert the will of the people as expressed in the EU referendum.
The House of Lords’ recent support for an amendment to keep Britain in the Customs Union, by a majority of 123, thus raises precisely the same ‘Peers Versus the People’ controversy as over the Lloyd George Budget in 1909 and the Parliament Act of 1911, and also rides roughshod over the Salisbury Convention of 1947 whereby the Lords do not vote down measures in a Government’s election manifesto. Theresa May would therefore be perfectly within her constitutional rights to do what Herbert Asquith threatened to do in 1910, which was to create enough Liberal peers to force through the will of the people. Jacob reminded us that the cricketer WG Grace had been one of the prospective peers on Asquith’s list.
While Jacob was speaking, I mentally formed a list of good pro-Brexit prospective peers, two of whom – Stuart Wheeler and Robin Birley, the former leader of the Referendum party – were in the audience. I would also have Patrick Robertson, founder of the Bruges Group, James Dyson, Helena Morrissey, David Abulafia, the head of Historians for Britain, Matthew Elliot and Dominic Cummings of Vote Leave, Gisela Stuart of Change Britain, Nigel Farage, Dominic Lawson, Charles Moore, and the founder of this website, Iain Martin all wearing their ermine on the red benches before the next Customs Union vote came up. They should be in the Lords anyhow, representing the 17.4 million of us whose votes for Brexit are being systematically flouted and stymied by the unelected chamber.
When I emerged from these reveries, Jacob was talking about the Irish border issue, and the tough stance that Britain should take over it. Last week Paul Hogan, the highly federalist Commissioner in Brussels, said, ‘We’re very pleased in the European Union that we’re dealing with the prime minister of the United Kingdom, not with Mr. Rees-Mogg.’ After Wednesday’s breakfast, it’s easy to understand why. That said, Jacob is still in his forties, and although I didn’t spot that primal glint of ruthless ambition in his eye that is so evident in other politicians, he did not go into politics just to be – some more Cs here – The Conscience of Conservatism.