Saint Alfie, Pray For Us! 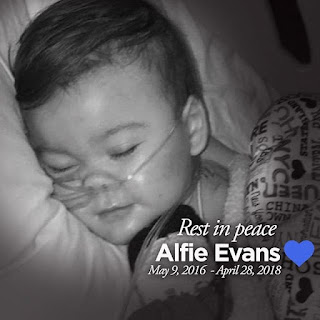 Alfie Evans has gone to be with Our Father in Heaven. Murdered by the State, with the active connivance and support of the so-called 'Catholic' Hierarchy of England. There was one glorious exception. His Lordship Philip Egan, Bishop of Portsmouth stood with Alfie and his parents.

Alfie was baptised and was confirmed in articulo mortis before his death by a Priest from outside the Liverpool Diocese, before that Priest was forced to leave Alfie by the Son of Satan, Malcolm McMahon, the evil Archbishop of Liverpool.

McMahon will receive his reward when he stands before Our Lord at the Judgment Seat, and is sent to serve his master in hell. It's too bad that he so totally ignored Christianity and his duty to confirm the brethren in Faith!

May Alfie pray for us who are still here and may he pray for England, the country that murdered him in cold blood!
Posted by Jovan-Marya Weismiller, T.O.Carm. at 12:36