Well, my short hiatus was even shorter than planned. Our overnight camping trip turned into an extended picnic, which was quite pleasant, even if not we had planned. We were under a wind advisory when we went to the lake, but according to the forecast it was supposed to calm down by 19.00. It hasn't! Since this has been the driest April in recent memory, it didn't seem a good idea to light a fire, even in the firepit, and without a fire, camping is not particularly fun.

This was especially frustrating because the Natural Resource District crew had cut up some fallen trees and left several chunks of log by the firepit, along with a pile of bark and wood slivers perfect for kindling. When we arrived, I found the perfect fire log! It had a hollow opening almost through the centre, and a bole that gave access to the hollow. I sat it up in the pit, put a couple of homemade firestarters in the bottom, foraged some dry pine needles and then stacked kindling on top of that. I had access to the firestarters through the bole. I was all set. As you can see, I had laid the perfect campfire that would burn all through the evening! 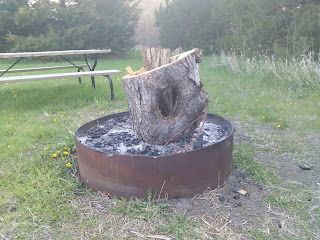 Now, by the time we get back out there, someone will have undoubtedly decided to have a picnic or a party, and my wonderfully laid fire will have been used!

We did take a couple of walks with the Household Canine. To our surprise, considering the cool weather we've had, the ticks are out. They seem to like my Cuter & Shorter Half rather than me, since she found several on her jeans and I saw none. Anyway, our picnic supper of beer, bread, and cheese was delicious.,