I like beer! I recall that when I was a young lad, I found an unopened bottle of beer on the roadside. Gleefully, I opened it and took a swallow. My immediate reaction, before pouring the remainder out, was, 'People drink this stuff?!' There is, however, a family legend that one Sunday afternoon when I was still in my high chair, I got a bit tiddly. My Uncle Glen, realising I had nothing to drink, uncapped a can of Country Club pilsener, and handed it to me. I happily drank most of it before my Mum and Dad realised what was going on. Uncle Glen got an earful! 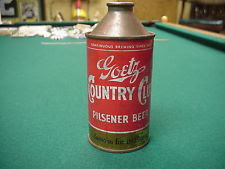 However, as I got older, my tastes obviously returned to where they had been when I was a baby., and I came to agree with Meyer Breslau, 'Beer that is not drunk has missed its vocation.'

I don't drink to excess, and, Laus Deo!, beer is not contraindicated by any of my medications. In fact, my doctors know of and approve my moderate drinking. I have three or four beers a day, one with supper and two or three spread out in the evening as I sit at my computer. I never get a 'buzz' or get pissed.

I love good beer, Czechvar (Budweiser-Budvar, if you live in most of the world outside the US!) from České Budějovice in Bohemia, Czechia, English stouts, Guinness porter, German and Belgian wheat beers and the rich dark beers, but those are all expensive. Once in awhile, when I'm feeling flush, I'll spring for one of them or try something new, either imported or a local craft beer.

The Cuter and Shorter Half and I like to check out local craft brewhouses. One that she hasn't had a chance to check out with me yet is Kansas Territory Brewing, in Washington KS, the town in which my sister lives. Last year I went down to visit her and her family for my grandniece's grade 8 graduation party. At the party, all of the adult males were drinking beer, but they were drinking 'light' beers, Coors, Budweiser, Miller, etc. but all of the light variety. The only time I will turn down an offer of a free beer is if it's light. It doesn't taste like beer, and since I drink for the taste, not to get drunk, why would I drink light beer?

I expressed my opinion, to the general hilarity of the guys, but one of them walked to his car, where he had a cooler. He handed me a can of a beer I'd never before seen, 'Life Coach Lager' from Kansas Territory. I opened it, took a swallow, and expressed my thanks for a decent beer. I was then told that it was brewed right there in town.

I found out that there was a pizza restaurant in the brewery, with limited hours, but that the pub across the street, Mayberry's, was under the same ownership and served all of their varieties. I have since 'taste tested' all of their beers, and they're all excellent, tho' the Life Coach Lager remains my favourite. I also discovered that the pub has excellent food, and the pizza at the brewery is pretty damned good, too!

A classic, the Beer Barrel Polka, with Frankie Yankovic

Theologically, of course, there is absolutely nothing wrong with moderate drinking, despite what Muslims and many protestant heretics say. As Chesterton said, 'In Catholicism, the pint, the pipe and the Cross can all fit together.' St Arnold of Metz, Patron Saint of Brewers said, 'From man’s sweat and God’s love, beer came into the world.'

Remember that some of the finest beers in the world are brewed by monks. As a sign near a Belgian monastic brewery says, 'The good Lord has changed water into wine, so how can drinking beer be a sin?'

And Frankie Yankovic doing In Heaven There Is No Beer,
which is why I drink it here!

I actually prefer bottled beer, but at home I tend to drink cans for two reasons. One, it is cheaper, and, two, we are unable to recycle glass locally, whilst we have curbside recycling for metals. And because of the cost, I tend to drink what many people dismiss, calling them 'yard beers', only fit to be imbibed whilst doing yard work. My favourite is Miller High Life, but depending on availability and cost, I also drink Hamm's and Pabst Blue Ribbon.

And the Irishman, St Columbanus, who founded some of those monasteries in Belgium and the Germanies where beer is brewed, said, 'It is my design to die in the brew house; let ale be placed in my mouth when I am expiring, that when the choirs of angels come, they may say, “Be God propitious to this drinker.' Now, that's my kind of Saint! 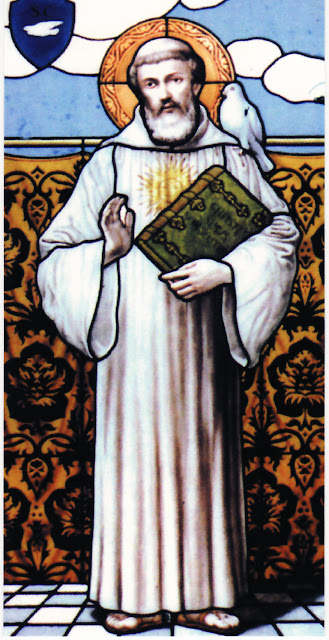