One hundred years ago last Saturday, 21 April 1918, Manfred Freiherr von Richthofen, the 'Red Baron' was shot down. He was the holder of the Pour le Merite, which you can see at his throat in the picture to the left, and a plethora of other decorations.

There is debate as to who fired the fatal shot that brought him down. The Royal Air Force officially credited Captain Arthur Roy Brown, DSC & Bar, RAF, a Canadian ace. However, since the fatal shot came from a .303 bullet, it is likely that he was felled by the Australians on the ground who were occupying the sector.

He was so well respected by his foes that he was buried with full military honours by 3 Squadron, Australian Flying Corps, the flight unit in nearest proximity to his coming down. Allied squadrons stationed nearby gave wreaths, one of which bore the words, 'To Our Gallant and Worthy Foe'.

Here is a picture of his funeral. Six officers of 3 Squadron served as pallbearers, and a guard of honour from the squadron's other ranks fired a salute. 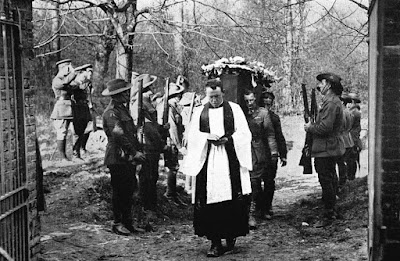 And here is avideo from a film of his funeral.