Another statement on the case of the Government of the UK murdering a small child.


From One Peter Five 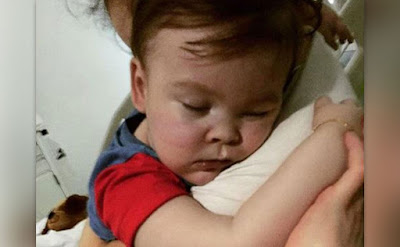 Members of the newly founded John Paul II Academy for Human Life and the Family (JAHLF), which has been partly established by former members of the Pontifical Academy for Life (PAV), have decided to publish a statement in defense of Alfie Evans and his parents, Tom Evans and Kate James. The following members – who are either Board Members, Advisory Board Members, or simple members – have signed the text below:
Professor Josef Seifert (President), Doyen Nguyen, M.D., S.T.D, Paul A Byrne MD, Professor Roberto de Mattei, Professor Claudio Pierantoni, Thomas Ward, MD, Philippe Schepens, MD, Professor Carlos Casanova, Dr. Maike Hickson, Professor Luke Gormally, John-Henry Westen, M.A., Christine de Marcellus Vollmer, Mercedes Wilson, Pedro Luis Llera, school director, Virginia Coda Nunziante, Judie Brown, Dame Colleen Bayer, John Bruchalski, MD, Anca Maria Cernea, MD, Richard Fitzgibbons, MD, Professor Stéphane Mercier,Steven W. Mosher, Claude Edward Newbury, MD, Jeanne Smits, Dr. Gerard van den Aardweg, Duke Paul von Oldenburg, Maria Madise.
Please see here the statement itself:
______________________________________________________________
For Alfie Evans
No man and woman of good will can remain indifferent watching the plight of Alfie Evans and his parents – their heroic battle against the tyranny of a medico-legal alliance.
The 23 month-old boy has remained alive for two days breathing on his own after having been removed from ventilator support on 22/04/18. He was granted Italian citizenship, and a medical air-ambulance was ready to take him to the Bambino Gesù Hospital in Rome for continued appropriate supportive care.
Yet the High Court of Manchester has ruled on 23/04/18 that the child will not be allowed to fly to Italy!
Is not the most obvious question that should prick our collective conscience: Who has the natural right to care for Alfie and safeguard his best interest? Is it the state or the child’s parents? It is self-evident that parents, by virtue of the parent-child relationship, have the natural right to act in the best interest and welfare of their child; and the exercise of this right cannot be unjustly denied by coercive state interference except in cases of abuse and neglect.
The second question which should prick our collective conscience is this: What does “best interest” refer to? To act in the best interest of someone is to will his or her good. The most fundamental good in this earthly life is none other than life itself, of which the most foundational dimension is the biological (vegetative) life. Who is the author of life if not the Creator God Himself? No human being is the author of his own life. The most basic human right is the right to life, and therefore the most fundamental duty of all men and women of good will is to safeguard human life from its very beginning to its natural end. Alfie’s right to life and his parents’ right to do what is in the best interest of their son mean that they must be allowed to fly to the Bambino Gesù Hospital.
From the above considerations, it is evident that the action of the High Court is a clear violation of basic human rights, both of the right to life and the natural right of parents. In what way then is the Court fulfilling its function as an instrument of justice?
Any man and woman of good will can recognize that the disregard of the right to life as well as the disregard of the natural right of parents are acts of injustice.
Therefore, as men and women of faith, we, members of John Paul II Academy for Human Life and the Family stand in solidarity with the parents of Alfie Evans. We earnestly urge that legal authorities (the Court of Appeal) let Alfie be transferred to the Bambino Gesù Hospital where he may receive appropriate treatment and care. We also respectfully ask that His Holiness Pope Francis renew his support for Alfie, and that Her Majesty Queen Elizabeth II will also intervene on behalf of Alfie, and that every doctor at Alfie’s bedside will not do anything to hasten his death or shorten Alfie’s life.
This post has been updated with more signatories.
Posted by Jovan-Marya Weismiller, T.O.Carm. at 16:57