I am not a mathematician. In fact maths were my worst subject in school, and I can honestly say that my inability to grasp the basic concepts beyond addition, subtraction, multiplication, and division is the reason I do not have an university degree. My university required basic competency in maths in order to gain a baccalaureate, and I could not demonstrate such knowledge.

However, that does not mean that I am not fascinated by maths and some of their applications. This is an example. Unlike Lloyd (Lindybeige), I had never heard of Penrose Tiles, developed by Sir Roger Penrose, OM, FRS, until I clicked on this video. I then looked them up on Wikipedia, and I was met with this first sentence, 'A Penrose tiling is an example of non-periodic tiling generated by an aperiodic set of prototiles.' OK, they're fascinating, but not that fascinating!

At any rate, here's an illustration of Penrose Tiles. 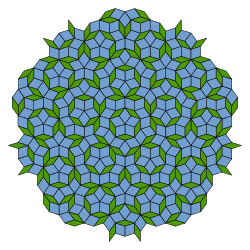 Here's the video I watched,

And here's the link to the Wikipedia article, Penrose Tiling.
Posted by Jovan-Marya Weismiller, T.O.Carm. at 02:17