Henry Sire: Catholic Lay People Have a “Right and Duty” to Correct the Papacy

Chevalier Henry Sire, SMOM (suspended), is the author of 'The Dictator Pope' and 'Phoenix from the Ashes: The Making, Unmaking, and Restoration of Catholic Tradition' (If you are moved to buy one of these books through these links, I am required to tell you that I will receive a small commission, at no additional cost to you.) He published the first under a nom de plume, 'Marcantonio Colonna', for fear of repercussions from the Vatican. The Vatican's subsequent efforts to discover the author so he could be 'punished' led to the phenomenon of #IAmMarcantonioColonna memes across the Catholic blogosphere and twitterverse. I did my bit with this collection, all of which were posted on my Facebook page, as well as being tweeted.

I have not yet read 'The Dictator Pope', but I am in the process of reading 'Phoenix From the Ashes', and I will post a review as soon as I complete it. 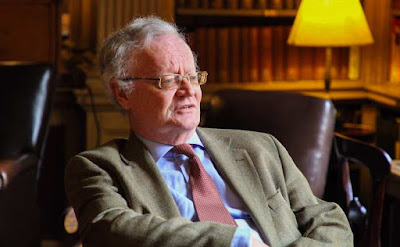 Historian H.J.A. Sire, a.k.a. Marcantonio Colonna,
author of the 'The Dictator Pope', photo by Edward Pentin

April 24, 2018 (LifeSiteNews) – Regarding troubling developments in the current papacy, author and historian Henry Sire said Catholic lay people “can’t just do nothing, because this would obviously give Pope Francis the idea that he can go ahead with his program, without any opposition.”
“Catholics have always realized that this was a right and a duty of Catholics,” he added.
“It’s only a sort of ideology of papolatry that makes people think that one can’t raise a voice in criticism of the Pope.”
Sire, recently revealed to be the author of the groundbreaking book, The Dictator Pope, was speaking to over three thousand listeners who tuned into this week’s first ever LifeSiteNews Pope Webcast.
“Controversial popes in past years have been ‘occasional phenomena,’ said Sire.  “What distinguishes Pope Francis is that he’s part of a crisis which has existed in the Church since the 1960s.  If that were not the case, people would not be so worried about it. It would have been impossible to elect somebody like Bergoglio as Pope in any other situation of the Church.  And he’s attempting, it appears … to change Church teaching. And this is what people are worried about at the moment.”
“This is not something that the ‘bad popes’ of the past had ever tried to do,” he added.
Sire explained that  in the 1990s, a group of cardinals known as the “St. Gallen Mafia,” had been plotting to oppose the succession of Cardinal Ratzinger as successor to John Paul II.  When they failed in 2005, they went on to oppose the pontificate of Benedict himself.
“On both occasions, in 2005 and 2013, in the conclaves, their candidate was Cardinal Bergoglio of Buenos Aires, who they reckoned would be the spearhead to implement a liberal program in the Church,” said Sire.
Although Pope Francis is basically “leading the Church in the direction that the St. Gallen Mafia intended,” said Sire, “It’s difficult to imagine anybody being really satisfied with the present papacy, even those who feel that the Church should go in a liberal direction.  They must be feeling rather uneasy at the opposition that the Pope is stirring up.” Preserving the Catholic Church
Despite the alarm the current papacy has raised throughout the Church, Sire says it would be a “big mistake” for anyone or group to make a move toward schism.
“This is the mistake that Archbishop Lefebvre made back under Paul VI and John Paul II,” he said.  “One has to avoid this because after all the object is to preserve the Catholic Church, it’s not to form a breakaway church.”
But there are certainly avenues short of “schism,” or drifting away from the Church, that all Catholics have available.
“The dubia that were presented by Cardinal Burke and the other cardinals are necessary demonstrations of opposition,” said Sire. “But one has to tread very carefully on the practical side and not give Pope Francis any excuse to deprive Cardinals of their cardinalates, or bishops of their dioceses.”
“Priests are in a very difficult situation,” noted Sire.  “One can’t attack the Pope, or attack ecclesiastical authority.”
Lay people play an important role as well, and actually have an obligation to make their concerns heard in a way that affects the pontificate.
“Whenever in the Church’s history there have been bad popes, Catholics have protested, and nobody thought that they were acting wrongly,” said Sire.  “The last pope whom I mention in my book who was very similar to Bergoglio in the sense that he was a very political man and not a great defender of the Catholic Church as such was Urban VIII in the seventeenth century.  There were enormous protests against him. And you’ve got famous cases like St. Catherine of Siena, who rebuked the Pope of her time.”
Contrary to popular notions, Catherine of Siena wasn’t actually a nun as she is often depicted.  She was a third order––lay member of an order––and was also not particularly well educated, and yet she was one of the greatest movers and shakers of her time, encouraging the Pope to come back to Rome.
Sire also spoke about the climate of fear that has gripped the Vatican during Pope Francis’ papacy.
“Everyone who knows the Vatican talks of this,” said Sire.  “It’s based on the style that the Pope has of dismissing those who criticise him or who are thought to criticise him.”
“There was the well-known case of the three officials of the Congregation for the Doctrine of the Faith (CDF).  They were simply summoned before the Pope and dismissed. And when Cardinal Mueller (head of the CDF) asked why this was done, Pope Francis simply said, ‘I’m the Pope.  I don’t need to give any explanations for what I do.’”
Additionally, the Pope is known to use vulgar language behind closed doors.  “The people working in the Vatican nowadays are well aware of that,” said Sire, noting that he has other character defects too, as first recounted many years ago in a report by Fr. Kolvenbach, superior of the society of Jesus, who recommended “in no uncertain terms that Fr. Bergoglio was quite unsuitable to be made a bishop.”  Pressure from Some Cardinals for Pope Francis to Resign?
“I don’t predict a schism at all,” said Sire.  “I’d be surprised if anybody were planning to make a very strong protest against Pope Francis.  In fact, one of the things that journalists have been talking about is a movement among cardinals to put pressure on Pope Francis to resign.
“But these are not the soundest cardinals,” he added.  “They are Roman Cardinals who are worried about the discredit that Pope Francis is bringing to the Papacy.  They are the people that Pope Francis has around him, and perhaps they may have some influence, but I think it would be a big mistake for anybody to get into any sort of schismatic movement.”
Posted by Jovan-Marya Weismiller, T.O.Carm. at 12:54