I grew up in Kansas and I now live in Nebraska. The Homestead Acts were vitally important to the white settlement and cultivation of these lands on the Great Plains. I, and most of my friends when I was a boy, lived on land that had been homesteaded in the 1860s and 70s. My Dad's grandfather had claimed his land under the Homestead Act of 1862 and the Timber Culture Act of 1873. When I was growing up, it was back in the family, being farmed by the original homesteader's grandson. It had been lost, as so many farms were, during the Great Depression. However, when Dad's cousin got married, his father-in-law, a wealthy doctor, bought the farm and gave it to the newlyweds as a wedding gift!

Today, I live just 20 minutes from the Homestead National Monument, which is on the land that Daniel Freeman claimed 150 years ago today. Here is his claim form. 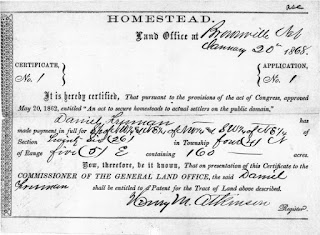