Nicknamed "Fighting Jack Churchill" and "Mad Jack", he was known for the motto: "Any officer who goes into action without his sword is improperly dressed." 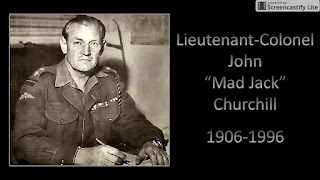 He was a British Army officer who fought throughout the Second World War armed with a longbow, bagpipes, and a basket-hilted Scottish broadsword.

Here is a biographical article from War History Online.

And here is a short YouTube video about him.