The Catholic Priest Who Was Robert Louis Stevenson’s Spiritual Father

Little known fact about RLS, but when Saint Damien was viciously attacked in print by an unscrupulous, heretical 'minister', Stevenson wrote a scathing rebuttal. 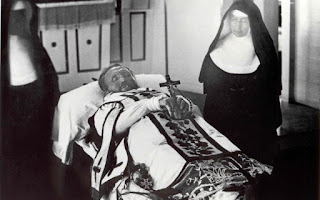 St Damien of Molokai on his funeral bier (Wikimedia Commons)


Stevenson, a Presbyterian, recognised that Fr Damien was not simply kind or public-spirited but that he was holy
Mention of the name Robert Louis Stevenson instantly brings to mind his three enduring classics: Treasure Island, Kidnapped and Doctor Jekyll and Mr Hyde. I should add a fourth: A Child’s Garden of Verses, a charming reconstruction in verse of a child’s imaginative world. What most lovers of his fiction will not know, however, is that he also had one significant encounter with the Catholic Church.
Born into the narrow, pious world of Edinburgh Presbyterianism, Stevenson was too intelligent a man to dismiss Christianity in adult life – though he certainly rejected its conventional and social aspects within the rigid hierarchies of Scottish society. Recently reading Robert Louis Stevenson in Samoa by Joseph Farrell, an account of the final four years of his life, 1890-1894, it was interesting to learn that he ran his unconventional household in an old-fashioned, paternalistic style – which included leading prayers every evening for his family and the Samoan staff.
Now the CTS has reprinted Fr Damien by RLS, first published in 1956, as part of its new CTS Heritage series which has been devised to celebrate 150 years of publishing. This is a superb idea and I hope to highlight other booklets in the series in due course. Father Damien, now St Damien of Molokai, Hawaii, is famous for the self-sacrificial and practical charitable work he did among the lepers of Molokai, dying among them in 1889. Stevenson, in his quest to find a permanent home in the South Seas for the sake of his health, visited the lazaretto a year later, spending a week among the people, weeping at their suffering and making notes of their memories.
Completely without sectarian bigotry, he recognised that Fr Damien was not simply kind or public-spirited but that he was holy. Noble-hearted himself, he knew sanctity when it was presented to him. Thus, when on a trip to Sydney in 1890 he read a brief letter by a Presbyterian minister, CM Hyde, to a fellow minister, HP Gage, which was published in the Sydney Presbyterian newsletter on 26 October 1889 and which mocked Fr Damien and his work, it elicited all the scornful power of his pen in response.
Stevenson’s “Open Letter” of 25 February 1890 has given the unfortunate Hyde an immortality he would not have wished, revealing all the latter’s petty prejudices and calumnies. Hyde described Fr Damien as a “coarse, dirty man, headstrong and bigoted”. Passing on some malicious and unfounded gossip, he added “he was not a pure man in his relations with women”. He was also affronted at the thought of Father Damien evangelising the lepers and bringing them the consolations of the Catholic faith.
With a skilled writer’s relish at demolishing this pompous, self-important man, RLS goes through each of Hyde’s criticisms in turn in his devastating critique, concluding with the resounding statement: “Well the man who tried to do what Damien did, is my father…and the father of all who love goodness; and he was your father too, if God had given you grace to see it.”
The man who once wrote “We lepers” had undergone an unusual metamorphosis – to become the spiritual father of the renowned Scottish writer.
Posted by Jovan-Marya Weismiller, T.O.Carm. at 00:13