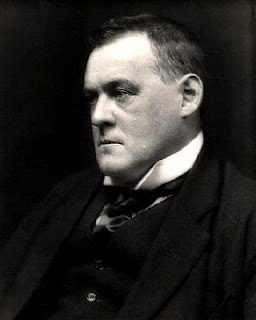 Hilaire Belloc
Here is a rich (and alas out-of-print) book about many things – certainly, the life story of Louis XIV, the ‘Sun King’ of France, amongst them.
Yet perhaps even more, it is also a book about the contrast and conflict between Catholic France and Protestant England and Holland, with whom Louis XIV struggled.
And, as we shall see, it is a book about capitalism and the emerging capitalist plutocracy in England and Holland, with which Louis XIV also struggled.
And, most obviously of course, it is a book about monarchy.
Now, many people coming to Hilaire Belloc today may imagine him as always a monarchist. It is an easy assumption to make: Belloc owes so very much to that late Nineteenth Century French Catholic culture he was born into.
And that French Catholic culture was not only staunchly traditional – it was also counter-revolutionary and monarchical. It resisted to the teeth the legacy of the French Revolution, which had overthrown the French monarchy.
But no, it is not true Belloc was always a monarchist.
For it is part of Belloc’s brilliance that he did not simply and unconsciously absorb the Catholic milieu he inhabited – but rather thought for himself in a profoundly original way.
And so, strange as it may seem, the young Belloc – although devoutly Catholic – began his writing career as an apologist for the French Revolution!
Enamoured of Rousseau’s Social Contract, Belloc loved human freedom and distinctly set himself apart from Catholic criticism of the 1789 Revolution.
Yet later, all this changed. The older Belloc renounced his youthful politics in favour of monarchism.
What happened? Did Belloc lose his early love of human liberty?
Arguably, the truth is quite, quite the opposite.
For Belloc never lost his love for liberty. Rather, he became convinced that the politics of his youth did not deliver freedom.
Particularly, he became convinced parliamentary democracy did not deliver freedom – it was a sham.
Rather, Belloc was persuaded that monarchy – of some kind – was more likely to preserve human freedom than parliamentary democracy.

In our culture today, this sounds absurd to many ears. We automatically and axiomatically assume that our modern forms of democracy are more representative of the will of the people than monarchy!
But let us neither be automatic nor axiomatic. Let us instead consider Belloc …
For this, dear Reader, is my real purpose for writing this review. And I must warn you what follows is not simply a book review, but something more – it is an enquiry into issues such as the evils of modern capitalism and the destruction of freedom, religion and tradition (themes which are very important to us at this website).
Given this is not a conventional book review, I will also warn you we will not be proceeding in a conventional fashion. Expect some odd digressions, even curve-balls then …

Belloc: From Revolution to Counter-Revolution

Belloc moved, as we have indicated, from being an advocate of Revolution to Counter-Revolution.

And such a move, we say, is not easy to comprehend – at least for those possessed by modern axioms regarding democracy.
Yet, unlike most of us, Belloc knew parliamentary democracy firsthand – he was twice elected as a Liberal Member of Parliament in the British House of Commons.
He was even what was then known as a radical Liberal – in other words, one of the most left-wing members of Parliament at that time.
But Parliament disillusioned him. It was above all his disillusioning experience of being a ‘representative’ of the people that convinced Belloc that parliaments – or Senates, Houses of Congress etc. – did not so much represent the will of the people – as they did the will of the banks and a capitalist plutocracy of business magnates and tycoons.
In short, Belloc became convinced that British democracy was a (bad) joke – the strings were really being pulled by hidden financial elites.
Thus, he began a crusade for decades against the power of finance – arguing that usury, the very verve of the banks, was a dreadful evil out of which only slavery could come.
The ‘Money-power’, as Belloc called it, was not only devouring human freedom – but also religion, culture and tradition.
Civilisational decay was therefore the manifest result for Belloc – a new materialistic culture with ever-decreasing standards in the ethical and intellectual arenas.
Belloc became a prophet, then, of both contemporary moral decay – and what we would now call ‘dumbing-down’.
And herein we find the reasons, he eventually embraced the Counter-Revolution …
(Continued...)