Today is the Feast Day of St John Chrysostom, my Patron Saint. In Serbian, he is Светог Јован Златоусти (Jovan Zlatoust). He was Patriarch of New Rome (Constantinople) from AD 398 to AD 404. 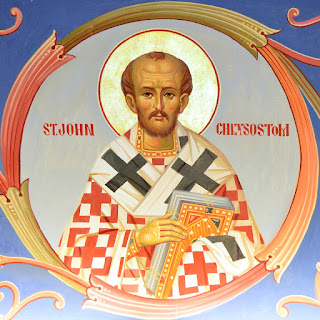 His name in Greek, Ἰωάννης ὁ Χρυσόστομος, means 'John the Golden Mouthed' from his eloquent preaching. His Paschal Homily is read to this day on Easter Morning in the Eastern Churches, and is often read as an introduction to the homily in Western Churches. He is the author of the primary Liturgy (Mass) of the Eastern Church, the Divine Liturgy of St John Chrysostom. 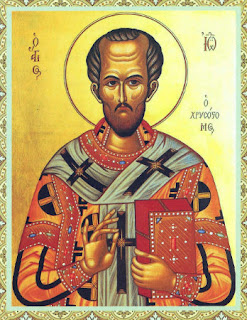 Of him, the Roman Martyrology says,


The feast of holy John, Patriarch of Constantinople, (in the years 398-407,) surnamed Chrysostom that is to say, golden mouth on account of the golden stream of his eloquence, whose word and example much profited the Church, but after many toils he ended his life in exile. Mention is made of him upon the 14th day of September, but the 27th of January is the day whereon his sacred body was brought to Constantinople under the Emperor Theodosius the younger, whence it was afterward brought to Rome, and buried in the Basilica of the Prince of the Apostles.

The Readings on his life from the Office of Matins for today,


John of Antioch, who, on account of the golden stream of his eloquence, is called by the Greeks Chrysostomos, or, the golden-mouthed, was a lawyer and man of the world of much eminence, before he turned his great intellect and wonderful industry to the study of things sacred. He took orders, and was ordained a priest of the Church of Antioch, and after the death of Nectarius, was forced by the Emperor Arcadius to accept, though sorely against his own will, the Archbishopric of Constantinople. Having received the burden of a shepherd's office, (upon the 26th day of February,) in the year 398, he set himself zealously to do his duty, struggling against the degradation of public morality and the loose lives of the nobility, and thereby drew upon himself the ill-will of many enemies, especially the Empress Eudoxia, whom he had rebuked on account of the money of the widow Callitropa, and the land of another widow. 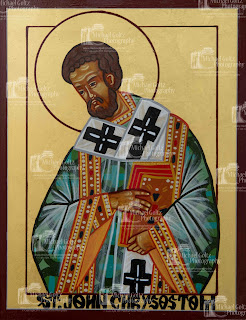 Come Bishops being assembled in a Council at Chalcedon, which Council the Saint held to be neither lawful, nor public, although he was commanded to go there, he refused. Whereupon Eudoxia, striving earnestly against him, caused him to be sent into exile. Soon after, however, the people of the city rose, and demanded his recall, and he was then brought back again amid great public rejoicings. Nevertheless he ceased not to war against vice, and absolutely forbade the celebration of public games round the silver statue of Eudoxia in the square outside the Church of the Eternal Wisdom. Upon this, a party of Bishops, who were enemies to him, banded together, and obtained that he should be banished again, which was done accordingly, on the 20th day of June, 404, amid the lamentations of widows and the poor, who felt as if they were being deprived of a common father. During this exile, it almost passeth belief how much Chrysostom suffered, and how many souls he turned to the faith which is in Christ Jesus. 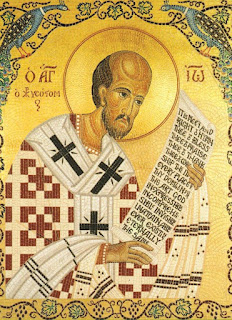 At this time a Council was assembled at Rome, wherein Chrysostom's restoration to his See was decreed by Pope Innocent I., but meanwhile, he was suffering great hardships and cruelties on his journey at the hands of the soldiers who had him in charge. As he passed through Armenia he prayed in the Church of the holy martyr Basiliscus, and the same night that blessed conqueror appeared to him in a vision and said Brother John, to-morrow thou shalt be with me. On the next day, therefore, he received the Sacrament of the Eucharist, and, arming himself with the sign of the cross, resigned his soul to God, it being the 14th of September. As soon as he was dead a furious hailstorm took place at Constantinople, and after four days the Empress died. The Emperor Theodosius, the son of Arcadius, brought the body of John Chrysostom to Constantinople with great state, and numerously attended, and on the 27th of January, laid it with magnificent honours in the grave, beside which he prayed for the forgiveness of his own father and mother. The holy body was afterwards taken to Rome, and is now buried in the Vatican Basilica. The number, devoutness, and brilliance of St. John Chrysostom's sermons and other writings, his acuteness in exposition, and the close aptness of his explanations of Holy Scripture, have been and are the object of universal wonder and admiration, and often seem not unworthy to have been dictated to him by the Apostle Paul, for whom he entertained a wonderful devotion. 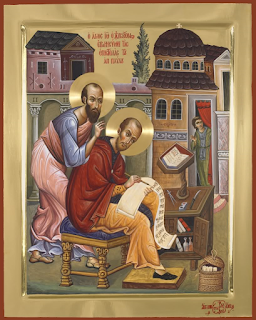