Replacing the vile, revolutionary, racist words of the Republican anthem les Armées catholique et royale (the Royal and Catholic Armies) of the Vendée and the Chouannerie marched to these words. Ironically, in light of subsequent history, they were also referred to as l'Armée Rouge (the Red Army) because of the emblem they wore sewn on their breast as they marched into battle. 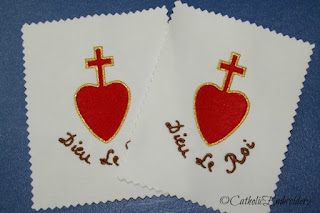