A while back, I posted an article from Liturgy Guy (link in sidebar) called Why Aren't Other Dioceses Looking to Lincoln?. He's followed it up with another good one! Oh, and a Hat Tip to His Excellency René Henry Gracida, Bishop Emeritus of Corpus Christi, who brought this to my attention and whose 46th Anniversary of his Episcopal Consecration is today. Congratulations, Your Excellency!
Increasing Vocations isn’t Rocket Science 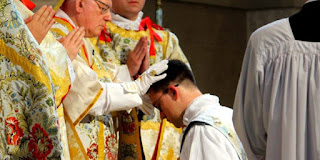 Of course the dire conditions facing faithful Catholics in Providence isn’t unique to them alone. Priest shortages, anemic ordination classes, and underwhelming statistics for seminary enrollment do not bode well for the coming years. In response to these bleak conditions, much of the Church hierarchy looks for the latest program, initiative, or marketing scheme to solve their vocations crisis.
Increasing vocations isn’t rocket science. We already know the answer: wherever traditional Catholicism blooms, vocations boom.
In the past I have written of the blueprint provided by the Dioceses of Lincoln, Nebraska and Charlotte, North Carolina. Despite their modest size (less than 100,000 registered Catholics in Lincoln and 200,000 in Charlotte), both dioceses are experiencing vocational success stories:
Both dioceses are known for their orthodoxy and embracing of tradition. The Diocese of Lincoln has never permitted girls to serve at the altar, and an increasing number of parishes in Charlotte have done the same. This has helped to emphasize the male only sanctuary (with the possible exception of readers), increasing the liturgical participation of young men.
Both dioceses also embrace our liturgical tradition. The Priestly Fraternity of Saint Peter (FSSP) has their North American seminary in Denton, NE, having been invited into the Lincoln diocese by (then) Bishop Fabian Bruskewitz in the 1990’s. The Fraternity offers the Mass and other sacraments using the 1962 liturgical books.
The diocese also has many Masses offered ad orientem (facing the east), including those offered by Bishop James Conley at the cathedral each of the last two years during Advent.
The Diocese of Charlotte has seen a steady increase in Traditional Latin Masses offered over the past several years, including a Sunday High Mass offered weekly at St. Ann’s. It’s interesting to note that 48% of Charlotte’s seminarians in 2016-2017 were from parishes that are most closely viewed with the reform of the reform and tradition friendly pastors.
It’s also worth noting here the success of the previously mentioned Fraternity of Saint Peter. While dioceses like Providence bemoan their immediate future, the Fraternity is experiencing the opposite. 2017 has been a record year for the Fraternity, having just ordained 19 men to the priesthood. To provide some perspective for this success, the FSSP currently has a presence in only 45 North American diocese (35 in the United States and 7 in Canada).
An addition to the liturgy , however, there is also another traditional component present wherever vocations boom: an authentically Catholic education.
As I’ve written about before, Lincoln has spent decades making a Catholic education affordable and orthodox. With habited religious sisters teaching (many having fled other dioceses in the Seventies and Eighties) and priests often serving as theology teachers and principals, the students enrolled in Lincoln parish schools are 96% Catholic. This continues through high school and onto an orthodox and thriving Newman Center at the University of Nebraska.
Think about that. Young men are attending orthodox Catholic schools for K-12, all the while many continue altar serving in a male only sanctuary, then they head off to university, where they are met by a vibrant (and authentic) Newman Center. At the same time, the diocese is home to two solidly orthodox seminaries: St. Gregory the Great (diocesan) and Our Lady of Guadalupe (FSSP).
It’s important to also highlight the Diocese of Wichita, Kansas as well. Much like Lincoln, an affordable and authentic Catholic school system is helping to increase vocations.
In 2017 Wichita ordained 10 men to the priesthood, one of the top ordination classes in the entire country. Next year they are set to ordain another 10. This means that in just two years they will have increased their number of diocesan priests by 20%. The role of (authentic) Catholic schools in this boom can’t be overstated.
In their 2008 publication “Who Will Save America’s Urban Catholic Schools?”, the Fordham Foundation noted:

Wichita might be home to one of the strongest
Catholic school systems in the nation . . .

…Catholic schools are parochial; they belong to the parish. They are not private schools that are owned and operated by those who use them. Therefore, every school family is encouraged to be an active parish steward.
Because the entire Diocese is committed to Stewardship, parishes make every effort to make a Catholic education, from kindergarten thru high school, available to active parish stewards without charging tuition. As far as we know, the Diocese of Wichita is the only diocese in the United States where every child of active parish stewards can attend Catholic grade and high school without paying tuition.

Wichita’s diocesan newspaper recently identified the prominent role Catholic schools have played in their vocations boom. Unlike the rest of the country, which has seen decline and closures, Wichita has seen enrollment increase since 1985, including at the kindergarten level where they also exceed the national average.
Prior to this year ordinations, the diocese had 58 seminarians, or one for every 1,845 registered Catholics, far exceeding the ratios of archdioceses like Los Angeles or New York.
And yet, too many dioceses still behave as if they are searching for a way out of their vocational desert, as if the path eludes them.
Simply put, tradition and orthodoxy are not optional. Reverent liturgies, incorporating traditional disciplines such as ad orientem Masses and altar boys serving, aren’t merely a preference. They are foundational.
Successful diocese also promote and encourage the Traditional Latin Mass instead of simply tolerating it, or worse, discouraging it. Traditional orders, as example, are booming while struggling dioceses are seeing retirements far outpace ordinations.
Further, we cannot afford to lose our Catholic children to the culture. As was always our belief, a Catholic child needs a Catholic education. Orthodox and affordable Catholic schools, such as we find in Lincoln and Wichita, as well as tradition friendly minor seminaries like St. Joseph’s in Charlotte, help to keep our Catholic kids Catholic.
Of course, there must always be prayer. Pray for vocations. Parishioners praying from the pews. Young men spending time before the Blessed Sacrament in prayer, listening and discerning. We must humbly ask God for priests.
But that prayer, and this is key, must be in conjunction with traditional liturgies and orthodox schools. To pray for priests while rejecting that which forms our young men and assists them to discern, is nothing less than tempting God. We are guilty of presumption.
Let us hope that more dioceses look to imitate Lincoln, Charlotte, and Wichita in the coming years so that all of the faithful might again witness an increase in priestly vocations.