Is Charles I a Saint (Part II). by Chevalier Charles Coulombe 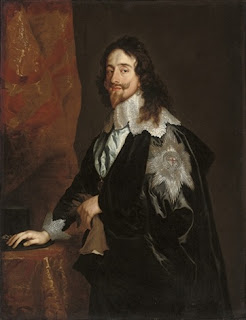 The splendid silence clings
Around me: and around
The saddest of all kings
Crowned, and again discrowned.

Comely and calm, he rides
Hard by his own Whitehall:
Only the night wind glides:
No crowds, nor rebels, brawl.

Gone, too, his Court: and yet,
The stars his courtiers are:
Stars in their stations set;
And every wandering star.

Alone he rides, alone,
The fair and fatal king:
Dark night is all his own,
That strange and solemn thing.

Although his whole heart yearn
In passionate tragedy:
Never was face so stern
With sweet austerity.

Vanquished in life, his death
By beauty made amends:
The passing of his breath
Won his defeated ends.

Brief life, and hapless? Nay:
Through death, life grew sublime.
Speak after sentence? Yea:
And to the end of time.

Armoured he rides, his head
Bare to the stars of doom:
He triumphs now, the dead,
Beholding London‘s gloom.

Our wearier spirit faints,
Vexed in the world‘s employ:
His soul was of the saints;
And art to him was joy.

King, tried in fires of woe!
Men hunger for thy grace:
And through the night I go,
Loving thy mournful face.

Yet, when the city sleeps;
When all the cries are still:
The stars and heavenly deeps
Work out a perfect will.
Posted by Jovan-Marya Weismiller, T.O.Carm. at 11:11