I just heard about this, tho' it's over a year old. Good on Poland, and may Christ our God and His Most Holy Mother bless and protect Poland and her people!

It is only fitting, since His Holy Mother, as Our Lady of Częstochowa, also known as the 'Black Madonna',has been Queen of Poland since 1652.

The Black Madonna is said to have miraculously saved the monastery of Jasna Góra (English: Bright Mount) from a Swedish invasion. The Siege of Jasna Góra took place in the winter of 1655 during the Second Northern War, as the Swedish invasion of the Polish-Lithuanian Commonwealth is known. The Swedes were attempting to capture the Jasna Góra monastery in Częstochowa. Seventy monks and 180 local volunteers, mostly from the szlachta (Polish nobility), held off 4,000 Swedes for 40 days, saved their sacred icon and, according to some accounts, turned the course of the war. This event led King John II Casimir Vasa to crown Our Lady of Częstochowa as Queen and Protectress of Poland in the cathedral of Lwów on April 1, 1656.

On 1 April 1656, during a holy mass in Lwów's Cathedral, conducted by the papal legate Pietro Vidoni, John Casimir in a grandiose and elaborate ceremony entrusted the Commonwealth under the Blessed Virgin Mary's protection, whom he announced as The Queen of the Polish Crown and other of his countries. He also swore to protect the Kingdom's folk from any impositions and unjust bondage.

It's official: Christ, the King of Poland! 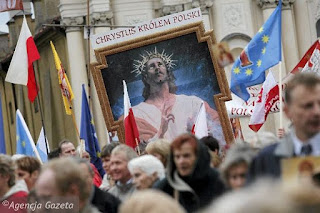 The Lord Jesus Christ Recognized as the King of Poland

Radio Maryja (@RadioMaryja) reports that the Bishops of Poland have enthroned, or, to use the bishops' more sober expression, "recognized" Christ as the King of Poland. This was done in the official presence of the President of Poland, Andrzej Duda. Many pilgrims were present in Poland for this event. Today the act will be repeated in all the Polish cathedrals and parishes. This took place yesterday, Saturday, at the Church of Divine Mercy in Krakow .
The providential and proximate origin of the act is to be found in revelations received, or said to be received, by the Servant of God Rosalia Zelkova. The Lord -- she said -- demanded that He be enthroned as King by the Polish Nation as such, and not just in the hearts of the Poles, in a particular manner, and this would have saved Poland in the war that was coming.
At first, especially after Vatican II, the idea did not find much support among the bishops. One may think that the shadow of Dignitatis Humanae was a factor, especially since the theme of the social right to religious liberty was so strong in the teaching of Pope Saint John Paul II. Another factor would have been the proximate origin, spoken of above. The same factor afflicts the Fatima Message. Under the diffused influence of theological modernism there is a diffidence even about the possibility of communications from Heaven.
But the social kingship of our Divine Lord is absolutely founded in necessary and dogmatic truths about Christ. It is not merely an element of private revelation. St. Gregory the Great said that they were heretics who denied that Christ is the King of and over everything. 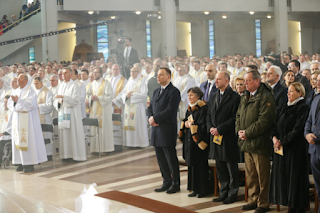