I honestly don't know where Dr Kwasniewski finds the time to write and/or edit so many books, but I'm certainly glad he does! So many books, so little time.

I’m pleased to announce the release of my latest book, Ministers of Christ: Recovering the Roles of Clergy and Laity in an Age of Confusion (Crisis Publications).
When this project was first conceived over a year ago, my initial idea was to write a critique of Paul VI’s attempted suppression of the subdiaconate and minor orders, of John Paul II’s permission of altar girls, and of Francis’s innovation of female “acolytes” and “lectors.” During its writing, however, the scope of the book considerably broadened to include a full-scale presentation and defense of the traditional sevenfold manifestation of Orders — priest, deacon, subdeacon, lector, acolyte, exorcist, and porter — together with an explanation of the distinct but mutually supporting roles of clergy and laity. In order to accomplish this, I stepped back further to look at the distinction and complementarity of the sexes in the order of creation and the order of redemption, a perspective that provides the ultimate foundation for the Church’s entire teaching on states of life, roles, and ministries. In this way the book serves as a response to the “gender madness” that has afflicted the world and has increasingly infected the Church.
The summer’s anti-TLM motu proprio Traditionis Custodes and the mounting threats against the former Ecclesia Dei institutes that avail themselves of the traditional rites of ordination conspire to make the book’s overall argument more urgent still. (Fortunately, subsequent to July 16 I was given the opportunity to do some last-minute revisions to the text in order to take this new scenario into account. Nothing of substance had to be changed in the overall argument.)
Ministers of Christ analyzes the problems with recent popes’ successive innovations in the area of ministry, showing how they have created a theologically and liturgically incoherent situation—a categorical rupture from a tradition firmly rooted in the most profound anthropological, Christological, and ecclesiological principles. In this regard the Church stands in desperate need of the correct (and corrective) witness of the usus antiquior. This will remain true even if a tyrannical attempt is made to prohibit the ancient rites of ordination, an act that would have no more legal validity than Traditionis Custodes itself. 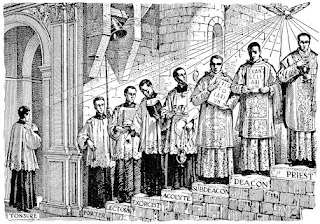 Part I, “Foundations,” looks at the most fundamental questions: how sexuality and the body have personal significance and therefore moral, theological, and liturgical significance as well; the connection between the Incarnation of Our Lord and the male priesthood and male sanctuary service; the blessing on womanhood conferred in and through Our Lady, the Virgin Mother of God; the Old Testament background and New Testament roots of the diaconate, subdiaconate, and minor orders, seen as radiating outward from the priesthood of Jesus Christ, and the solemn tradition behind this ecclesiastical hierarchy; and the proper role of the laity in the great world outside the churches, where they exercise their primary responsibilities.
Part II, “Deviations,” takes a critical look at practices that entered the Church after the Second Vatican Council—above all, the attempt to sideline the subdiaconate and minor orders and the habitual use of female lectors and altar servers, whether filling in as “substitutes” or, as Pope Francis would have it, installed as ministers. It explains how these distortions and novelties misconstrue and muddle the callings of laity and clergy as well as their diverse but complementary modes of participation in the liturgy. In the course of the chapters, the notion of “active participation” is freed from its harsh captivity as a slogan trafficked by modern liturgists.
Part III, “Restoration,” charts a path out of this mess into a healthier church life, making the case for several related proposals:– the universal reestablishment of the subdiaconate and minor orders, which have never been and cannot be abrogated and which remain in use to this day;– a return to the traditional lex orandi of the classical Roman rite, which embodies true doctrine about states of life, ministries, and sexes;– the wearing of veils by women in church as a sign of their distinctive role in the Mystical Body;– the full acceptance of the supernatural and sacrificial vision of priesthood and consecrated life that attracts vocations today as it always did in the past, together with a firm repudiation of the “heresy of activism” that extinguishes the primacy of prayer and the ultimacy of contemplation;– a reversal of the mad race of aggiornamento, to be replaced by the serene embrace of the essential changelessness of the Christian religion, which worships the immutable God in His eternal truth, reflected in traditional liturgical rites.
This book also includes the definitive versions of two essays by Bishop Athanasius Schneider: “The Significance of Minor Ministries in the Sacred Liturgy” and “Healing the Rupture: A Call for the Restoration of Minor Orders.”
Ministers of Christ concludes with three litanies for private devotional use. The first is for the clergy in general. The second and third, based on the Roman Martyrology, remind us that the Church’s history provides many examples of saintly subdeacons, lectors, acolytes, and exorcists whom we ought to invoke. Lastly, there is a select bibliography divided into topics.
Ministers of Christ: Recovering the Roles of Clergy and Laity in an Age of Confusion.   By Peter Kwasniewski, with two chapters by Bishop Athanasius Schneider.   Foreword by Leila Marie Lawler.   Manchester, NH: Crisis Publications, 2021.   xliii + 285 pp.   Paperback $19.95.
Here is a short video (by no means professional...) that has more or less the same content as the post above, for those who prefer the video format.
Posted by Jovan-Marya Weismiller, T.O.Carm. at 16:51