Today is the Afterfeast of the Nativity of Christ and the Feasts of the Holy Martyr Anysia and of the Holy Hieromartyr, Zoticus, Protector of Orphans.
✠✠✠✠✠ 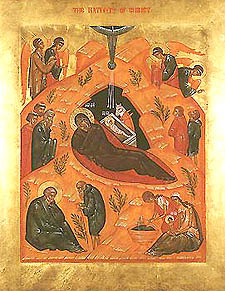 On December 30, the Afterfeast of the Nativity, let us offer thanks to Christ our God, Who is born of a Virgin for our salvation.

As the days begin to grow longer, we recall that the Lord is also called the Sun of Righteousness, and enlightens those who were in darkness. At this season of the year the daylight increases, and we remember the words of Saint John the Baptist, “He must increase, but I must decrease” (John 3:30). 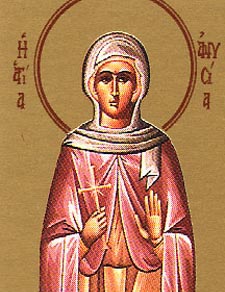 The Holy Virgin Martyr Anysia lived in the city of Thessalonica during the reign of the co-Emperor Maximian (286-305). Upon the death of her parents, who had raised her in Christian piety, Saint Anysia sold everything she owned, distributing her riches to the poor, and she began to lead a strict life of fasting, vigil, and prayer.

During his persecution against Christians, Maximian issued an edict stating that anyone had the right to kill Christians with no fear of punishment. Soon there were many bodies to be found in cities, towns, and by the roadside. Once, when Saint Anysia was on her way to church, a pagan soldier stopped her and demanded that she come along to the festival of the sun to offer sacrifice. Saint Anysia gently pulled herself away from him. When the soldier boldly grabbed her and attempted to tear the veil from her head, she shoved him, spit in his face and said, “My Lord Jesus Christ forbids you!”

In anger, the soldier ran her through with his sword. Those gathering over her body wept and loudly complained against the cruel emperor for issuing an edict that resulted in the death of many innocent people. Christians buried the martyr near the city gates, and a chapel was built over her grave.
Troparion — Tone 4

Your lamb Anysia calls out to You, O Jesus, in a loud voice: / “I love You, my Bridegroom, and in seeking You I endure suffering. / In baptism I was crucified so that I might reign in You, / and I died so that I might live with You. / Accept me as a pure sacrifice, / for I have offered myself in love.” / Through her prayers save our souls, since You are merciful.
Kontakion — Tone 3

As a two-fold lamp, you illumine the Church of Christ / with truly mystical radiance. / You brought forth a hundred-fold fruit through your contest, O Anysia; / and you shone forth in asceticism, O Melania. / You were both found worthy of the incorruptible life of the righteous.
✠✠✠✠✠ 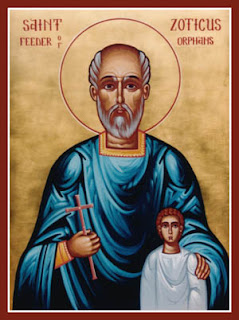 The Hieromartyr Zoticus, Protector of Orphans, an illustrious and rich Roman, was in the service of Saint Constantine the Great (306-337). When the emperor transferred the capital from Rome to Constantinople, Zoticus also moved there. Soon, however, spurning worldly honours, Zoticus was ordained to the holy priesthood, and he began to provide for the destitute and orphaned in his own home. Then, receiving funds from Saint Constantine, he built a place of treatment for the sick, a shelter for the homeless, where he took in those afflicted with leprosy, rescuing them from the soldiers who had been ordered to drown them in the sea.

When Saint Constantine’s son, Constantius (337-361), an adherent of the Arian heresy, succeeded his father, Saint Zoticus was accused of receiving a large sum of money from the deceased emperor. When asked about this, Zoticus showed the emperor the homeless and sick home he had built. Constantius became angry, for he thought that Zoticus had purchased jewels with the money received from his father, and he wanted them back.

He ordered Saint Zoticus to be tied to wild mules, which dragged the saint over the stones. His whole body was lacerated, and the saint gave up his soul to God. A stream of pure water sprang forth at the place of his death, from which many received healing.
Troparion — Tone 3

Your holy martyr Zoticus, O Lord, / through his suffering has received an incorruptible crown from You, our God. / For having Your strength, he laid low his adversaries, / and shattered the powerless boldness of demons. / Through his intercessions, save our souls!
Kontakion — Tone 2

(Podoben: “You sought the heights...”)
You appeared as a bright star announcing Christ with your radiance, / which is repulsive to this world, O Martyr Zoticus; / extinguishing the allure of false gods, / you enlighten the faithful, / always interceding for us all.
Posted by Jovan-Marya Weismiller, T.O.Carm. at 00:05