Pachamama Archbishop Insults Christ: "Layman," "Like All Of You," "No Sacrifice"

A Bishop elevated to the purple by Francis preaching rank heresy? I'm shocked, I say, shocked! Unfortunately, I'm not at all surprised. 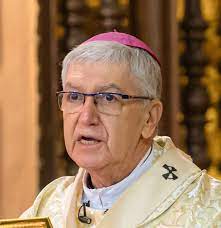 “Jesus doesn’t die offering the sacrifice of a holocaust, Jesus dies as a murdered layman, to which He decides not to respond with vengeance and who accepts the cross to give us a sign of life.”

This is what Pachamama Archbishop Carlos Castillo Mattasoglio of Lima, Peru, a Francis buddy, rambled during a December 19 Eucharist in his Cathedral.Castillo insisted that according to him Christ “dies as a layman who gives hope to humanity, he dies as a human being like all of you who are present here, we too, because we can’t be priests without first being baptised lay people.” This creed is similar to the one of the Jehova Witnesses or Mormons.Conversly, the Catholic Faith, transmitted by the Apostles, teaches that Christ is "the true priest" and his death is a "redemptive sacrifice" (CCC 1545). St Paul’s Letter to Hebrews explains Christ as the high priest who offers himself once and for all for the forgiveness of sins.No wonder, Francis and his Pachamama friends are furiously opposed to the Catholic Faith as expressed in the Roman Liturgy and even in Vatican II.