Feast of St Thomas of Canterbury, Bp&M & the Fifth Day of Christmas

Today is the Feast of St Thomas of Canterbury, also known as Thomas à Becket. He was Archbishop of Canterbury and Chancellor of England under King Henry II. They had been best friends until Henry made him Chancellor. Becket tried to warn the King, telling him, 'Should God permit me to be the archbishop of Canterbury, I would soon lose your Majesty's favour, and the affection with which you honour me would be changed into hatred. For there are several things you do now in prejudice of the rights of the Church which make me fear you would require of me what I could not agree to; and envious persons would not fail to make it the occasion of endless strife between us'.

He continued to refuse the promotion until the Legate of the Holy See, Cardinal Henry of Pisa, overrode his scruples. Having accepted it, his prophecy came true. From a worldling he became a devout Churchman, who took his duties seriously. This led to Henry's friendship turning to hatred.

In June 1170, Roger de Pont L'Évêque, the archbishop of York, along with Gilbert Foliot, the Bishop of London, and Josceline de Bohon, the Bishop of Salisbury, crowned the heir apparent, Henry the Young King, at York. This was a breach of Canterbury's privilege of coronation, and in November 1170 Becket excommunicated all three. While the three clergymen fled to the king in Normandy, Becket continued to excommunicate his opponents in the church, the news of which also reached Henry, who was in his French dominions.

Upon hearing reports of Becket's actions, Henry is said to have uttered words that were interpreted by his men as wishing Becket killed.The king's exact words are in doubt and several versions have been reported. The most commonly quoted, as handed down by oral tradition, is "Will no one rid me of this turbulent priest?"

Four of Henry's knights, Reginald FitzUrse, Hugh de Morville, William de Tracy and Richard le Breton, taking this as a royal command, went to Canterbury and murdered Thomas.
Edward Grim, a monk of Canterbury, who was wounded in the attack, left an account:

The wicked knight leapt suddenly upon him, cutting off the top of the crown which the unction of sacred chrism had dedicated to God. Next he received a second blow on the head, but still he stood firm and immovable. At the third blow he fell on his knees and elbows, offering himself a living sacrifice, and saying in a low voice, "For the name of Jesus and the protection of the Church, I am ready to embrace death." But the third knight inflicted a terrible wound as he lay prostrate. By this stroke, the crown of his head was separated from the head in such a way that the blood white with the brain, and the brain no less red from the blood, dyed the floor of the cathedral. The same clerk who had entered with the knights placed his foot on the neck of the holy priest and precious martyr, and, horrible to relate, scattered the brains and blood about the pavements, crying to the others, 'Let us away, knights; this fellow will arise no more.

A short video from Catholic Online


And it's the fifth day of Christmas. 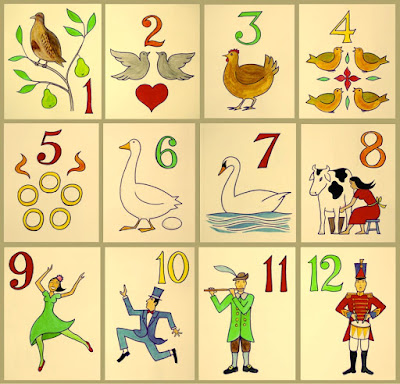 On the fifth day of Christmas, my true love sent to me
5 golden rings.