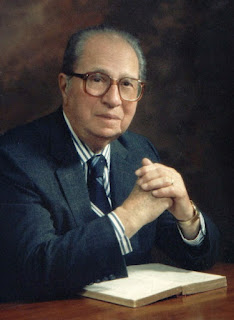 Today would have been the 119th birthday of the great Thomist philosopher, Mortimer J. Adler. I was privileged to meet Dr Adler in the 1970s. As early as 1940, James T. Farrell called Adler "the leading American fellow-traveller of the Roman Catholic Church". I asked him why he wasn't a Catholic, given his philosophic interests. He had been raised in a non-believing Jewish household and he told me he wasn't able to make the leap of faith. He finally did, being baptised as an Anglican because of his devoutly Episcopalian wife, and after her death becoming Catholic before his own. Adler was formally received into the Catholic Church by long-time friend and admirer, Pierre DuMaine, Bishop of San Jose, CA. "Finally," wrote another friend, Ralph McInerny, "he became the Roman Catholic he had been training to be all his life".

I'm sure he and the Angelic Doctor are having some great conversations!