May St. Thomas Beckett Inspire Cowardly Bishops To Stop Being Lackeys of the Godless State

'St. Thomas Beckett, contrary to propaganda, did NOT die for "religious liberty". ... One can imagine St. Thomas' horrified reaction to the modern bishop's never-ending surrender to State control over the local church.' 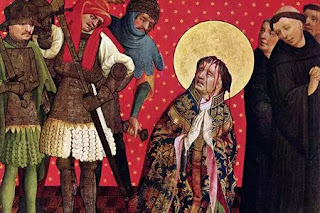 St. Thomas Beckett, contrary to propaganda, did NOT die for "religious liberty". That extremely dangerous and blasphemous idea, where all religions are equal and not very important, the State neutral in matters religious, appeared hundreds of years later in the writings of Freemasons, in which this idea is the cornerstone of their counter-church. Liberty is "a power perfecting man" (Libertas, Leo XIII), and what is not true, no man has a right to, let alone to propagate it in public. Paradoxically, "religious liberty" where established becomes the de facto State religion (leading to disintegration and societal collapse). St. Thomas Beckett, unlike today's modern bishops, had a firm grasp on the rights of Christ the King and His Church over the State. Unlike today's bishops, St. Thomas was aware, and acted accordingly, when the State (even wayward Catholics, such as the King) attempted to interfere with the rights of the Church.

One can imagine St. Thomas' horrified reaction to the modern bishop's never ending surrender to State control over the local church. Or the modern bishop's near deafening silence over State glorification and promotion of pre-natal infanticide, the murder of the elderly, and the glorification of sexual immorality (even to the point of profaning marriage, and denying human sexuality). St. Thomas would not have been surprised that such cowardly and wayward bishops would lock Catholics out of their churches and join the authoritarian, neo-pagan State, even joyfully taking its money (for a price of course).

Let us now jump forward from the 12th century to the 21st.

In 2020, for example, the Catholic Church in Canada became the Catholic Church OF Canada; in essence the "spiritual animator" for the new "humanism". We should not be surprised with the ease of their capitulation. In fact, they had already been for decades flirting, even copulating with the State.

The late, saintly Abbe de Nantes (persecuted by the Roman churchmen) called this lust for the new "humanism" the "MASDU":" MOVEMENT FOR THE SPIRITUAL ANIMATION OF WORLD DEMOCRACY, MASDU (Mouvement d’Animation Spirituelle de la Démocratie Universelle). He outlined this politico-spiritual utopia from its origins in the compromisers with masonic revolution, Lamennais and Sangier; to be developed by Jacques Maritain in his "Integral Humanism" (inspired by American so-called "religious liberty"). In essence, since 1776 and 1789, the vast majority of churchmen have concluded that masonic principles are the winners, and that Catholics should join the winners' side. Thus a never ending stream of compromises and betrayals (Americanism, Canadianism, Modernism, nouvelle theologie etc.). Thus Gregory XVI's Mirari Vos is an outrage of anti-liberalism, Pius IX's Quanta Cura, The Syllabus have to be buried or "reinterpreted", Leo XIII's Libertas, Immortale Dei, and Humanum Genus are the rantings of a deluded old man. And so on. Need I mention that Pius XI's Quas Primas was dead off the printing press? But these holy popes were doing nothing but preaching the Gospel; nothing but informing us that (as Pius XI noted) social modernism was as dangerous and perverse as doctrinal modernism. In fact, they are evil twins.

With this in mind, and realizing that virtually every bishop alive either rejects or "reinterprets" the above mentioned unchangeable Catholic teachings, let us see what the main points of the MASDU are, so as to understand the mindset of bishops who would so easily betray the Church into the hands of "sinful men" (Matt 26:45).

This system can be broken down into three parts, to which there is to be added one important corollary:

1° - It is not simply the Church and Christendom which form the “ unit of Salvation ”, but mankind as a whole.

2° - The new Gospel of this community is the Declaration of the Rights of Man, with its trilogy of Liberty, Equality, and Fraternity.

3° - The building of a World Democracy is the analogy here on earth of the Kingdom of God, and it is to be attained through the coming of Justice and Peace, in Truth and Love.

And the Corollary: that the function of Religion – by which is to be understood a union of all the existing religions – is to provide inspiration and Spiritual Animation for mankind thus regenerated.

Is the above not the "Gospel" of Pope Francis, Cardinal Cupich et al; bringing decades of sliding and compromise to a logical conclusion? When you understand that their minds are seeped in the "humanism" of the MASDU, you immediately understand why they demand the Sacraments have to go.

Thus you can understand why churchmen so readily surrendered to the State, boarded up their churches, crushed the faithful, denied Extreme Unction, pushed the experimental drugs, took the State money; even went beyond the pagan secular Authorities in their eagerness to lock us out of OUR churches! Simply, they were trying to show the world that they too had the "cult of man". They were manifesting their readiness to called upon by the globalist elite as the local "spiritual animator for universal democracy."

For a complete exposition of the MASDU, please see here. And do not forget to offer a prayer for the soul of the saintly Abbe.

Happy Feast Day dear friends, let us make merry that St. Thomas is in Heaven. And let us, like him, never contemplate departing from our Holy Mother, the Church, no matter how evil a churchman may be!

ST. THOMAS BECKETT, PRAY FOR US
Posted by Jovan-Marya Weismiller, T.O.Carm. at 16:49