Today is the Leavetaking of the Feast of the Nativity of Christ, Christmas and the Feast of Our Venerable Mother Melania the Roman.
✠✠✠✠✠ 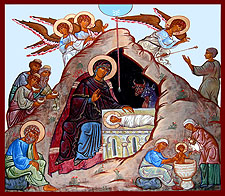 Materials for the Leavetaking of the Nativity are taken from the service of the Feast day itself in the Menaion. The Scripture readings at Liturgy, however, are of the day, not of the Feast. The Prokeimenon, Alleluia verses, and Communion hymn are all of the Feast.

Your Nativity, O Christ our God, / has shone to the world the Light of wisdom! / for by it, those who worshipped the stars, / were taught by a Star to adore You, / the Sun of Righteousness, / and to know You, the Orient from on High. / O Lord, glory to You!
Kontakion — Tone 3 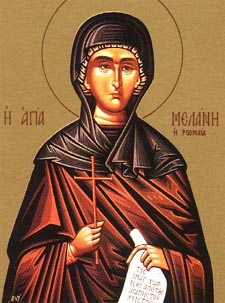 Saint Melania was born in Rome into a devout Christian family. Her parents, people of property and wealth, hoped that their daughter would marry and have children who would inherit their wealth.

At fourteen years of age, Melania was married to the illustrious youth Apinianus. From the very beginning of their married life, Saint Melania asked her husband to live with her in chastity or else release her from the marriage. Apinianus answered, “I cannot agree to this right now. When we have two children to inherit the property, then we shall both renounce the world.”

Soon Melania gave birth to a daughter, whom the young parents dedicated to God. Continuing to live together in marriage, Melania secretly wore a hair shirt and spent her nights in prayer. The second child, a boy, was premature and had severe complications. They baptized him, and he departed to the Lord.

Seeing the suffering of his wife, Apinianus asked the Lord to preserve Saint Melania’s life, and he vowed to spend the rest of their life together in chastity. Recovering, Saint Melania stopped wearing her beautiful clothing and jewellery. Soon their daughter also died. The parents of Saint Melania did not support the young couple’s desire to devote themselves to God. It was only when Saint Melania’s father became deathly ill, that he asked their forgiveness and permitted them to follow their chosen path, asking them to pray for him.

The saints then left the city of Rome and began a new life completely dedicated to the service of God. Apinianus at this time was twenty-four years of age, and Melania twenty. They began to visit the sick, to take in wanderers, and to help the indigent. They visited those who were exiled, and mine-convicts, and the destitute, there in debtor’s prison. After selling their estates in Italy and Spain, they generously helped monasteries, hospitals, widows and orphans in Mesopotamia, Syria, Egypt, Phoenicia, and Palestine.

Many churches and hospitals were built with their assistance. Churches of both West and East benefited from them. Leaving their native land, they set sail for Africa, and a strong storm arose while they were at sea. The sailors said that this was because of the wrath of God, but Saint Melania said that it was not God’s will that they should go directly to their destination.

The waves carried the ship to an island on which barbarians had landed. The besiegers demanded a ransom from the inhabitants, or else they threatened to lay waste the city. The saints supplied the necessary ransom, and thus saved the city and its people from destruction.

Resuming their voyage, they landed in Africa and helped all the needy there. With the blessing of the local bishops, they made offerings to churches and monasteries. During this time Saint Melania continued to humble her flesh by strict fasting, and she fortified her soul by constantly reading the Word of God, making copies of the sacred books and distributing them to those who lacked them. She sewed a hairshirt for herself, put it on, and continued to wear it.

The saints spent seven years in Carthage and then decided to visit Jerusalem. At Alexandria, they were welcomed by the bishop, Saint Cyril, and they met in church with the holy Elder Nestorius, who was possessed of the gift of prophecy and healing. The Elder turned to them and told them to have courage and patience in expectation of the Glory of Heaven.

At Jerusalem, the saints distributed their remaining gold to the destitute and then spent their days in poverty and prayer. After a short visit to Egypt, where the saints visited many of the desert Fathers, Saint Melania secluded herself in a cell on the Mount of Olives. Only occasionally did she see Saint Apinianus.

Later, she founded a monastery, where eventually ninety virgins lived in obedience to Saint Melania. Out of humility, she would not consent to be abbess, and lived and prayed in solitude as before. In her instructions, Saint Melania urged the sisters to be vigilant and to pray, to disdain their own opinions and cultivate first of all love for God and for one another, to keep the holy Orthodox Faith, and to guard their purity of soul and of body.

In particular, she exhorted them to be obedient to the will of God. Calling to mind the words of the Apostle Paul, she counselled them to keep the fasts “not with wailing, nor from compulsion, but in virtuous disposition with love for God”. By her efforts, an oratory and altar were built in the monastery, where they enshrined the relics of saints: the Prophet Zacharias, the holy Protomartyr Stephen, and the Forty Martyrs of Sebaste. About this time Saint Apinianus fell asleep in the Lord. Saint Melania buried his relics and there spent another four years in fasting and unceasing prayer.

Having completed her tasks, the saint left Jerusalem for Constantinople, hoping to save the soul of her pagan uncle Volusianus who had travelled there from Rome. Along the way, she prayed at the relics of Saint Laurence (August 10), at the place of his martyrdom, and received auspicious signs. Arriving in Constantinople, the saint found her uncle had fallen ill. Her demeanour and her inspired discourses had a profound influence on the sick man. He gave up pagan impiety and died a Christian.

During this time many inhabitants of the capital were deceived by the heretical teaching of Nestorius. Saint Melania accepted anyone who turned to her for a proper explanation, converting many of them to Catholicism. Many miracles were worked through the prayers of the saint.

Returning to her own monastery, the saint sensed the approach of death and told this to the priest and the sisters. They listened to her final instructions with deep sorrow and with tears. Having asked their prayers and commanding them to preserve themselves in purity, she received the Holy Mysteries with joy. Saint Melania peacefully gave up her soul to the Lord in the year 439.
Troparion — Tone 8

The image of God was truly preserved in you, O Mother, / for you took up the Cross and followed Christ. / By so doing, you taught us to disregard the flesh, for it passes away; / but to care instead for the soul, since it is immortal. / Therefore your spirit, O holy Mother Melania, rejoices with the angels.
Kontakion — Tone 3

As a two-fold lamp, you illumine the Church of Christ / with truly mystical radiance. / You brought forth a hundred-fold fruit through your contest, O Anysia; / and you shone forth in asceticism, O Melania. / You were both found worthy of the incorruptible life of the righteous.
Posted by Jovan-Marya Weismiller, T.O.Carm. at 00:06