Today is the Afterfeast of the Nativity of Christ, and the Feasts of the Holy Apostle, First Martyr and Archdeacon Stephen and of Our Venerable Father and Confessor Theodore the “Branded One”.
✠✠✠✠✠ 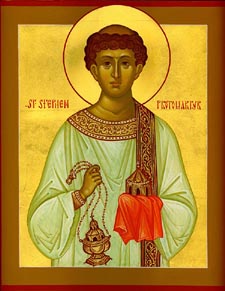 The Holy Protomartyr and Archdeacon Stephen was the eldest of the seven deacons, appointed by the Apostles themselves, and therefore he is called “archdeacon.” He was the first Christian martyr, and he suffered for Christ when he was about thirty. In the words of Asterias, he was “the starting point of the martyrs, the instructor of suffering for Christ, the foundation of righteous confession, since Stephen was the first to shed his blood for the Gospel.”

Filled with the Holy Spirit, Saint Stephen preached Christianity and defeated Jewish teachers of the Law in debate. The Jews maligned Saint Stephen, saying that he had uttered blasphemy against God and against Moses. Saint Stephen came before the Sanhedrin and the High Priest to answer these charges. He gave a fiery speech, in which he recounted the history of the Jewish nation, and denounced the Jews for persecuting the prophets, and also for executing the promised Messiah, Jesus Christ (Acts ch. 7).

During his speech, Saint Stephen suddenly saw the heavens opened and Jesus Christ standing at the right hand of God. The Jews shouted and covered their ears, and rushed at him. They dragged him out of the city and stoned him, but the holy martyr prayed for his murderers. Far off on the heights stood the Mother of God with the holy Apostle John the Theologian, and She prayed fervently for the martyr. Before his death Saint Stephen said, “Lord Jesus, receive my spirit. O Lord, lay not this sin to their charge.” Then he joyfully gave up his pure soul to Christ.

The body of the holy Protomartyr Stephen, left to be eaten by beasts, was secretly taken up by the Jewish teacher Gamaliel and his son Habib, who buried Stephen on his estate. They both believed in Christ and later received holy Baptism.
Saint Stephen is also commemorated on August 2 (Translation of his relics) and on September 15 (Uncovering of his relics in the year 415).

(Podoben: “Go quickly before...“)
Your head is crowned with a royal diadem, / because of the struggles you endured for Christ God, O first of the Martyrs to suffer; / for when you rebuked the fury1 of the Jews, / you saw your Savior at the Father's right hand. / Always pray to Him for our souls.
Kontakion — Tone 3 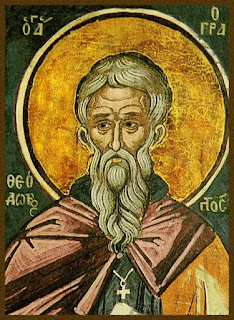 Saint Theodore the Confessor and his brother Theophanes (October 11) were born in Jerusalem to Christian parents. From early childhood, Theodore shunned childish amusements and loved to attend church services. With his younger brother Theophanes (October 11), he was sent to the Lavra of Saint Savva to be educated by a pious priest. Both brothers became monks, and Saint Theodore was ordained to the holy priesthood.

The iconoclast emperor Leo V the Armenian (813-820) expelled and replaced the pious ruler Michael I Rhangabe (811-813). In the beginning, Leo concealed his heretical views but later declared himself an iconoclast. The Patriarch of Jerusalem sent the two brothers to Constantinople to defend the holy icons. Theodore refuted Leo’s arguments, proving the falseness of his beliefs. Leo ordered that both brothers be beaten mercilessly, and then had them sent into exile, forbidding anyone to help them in any way.

Under the subsequent emperors, Michael II (820-829), and particularly under the iconoclast Theophilus (829-842), both brothers returned from exile. Again they were urged to accept iconoclasm, but they bravely endured all the tortures. They were sent into exile once more, but later returned. This time they were subjected to fierce torture, and finally, their faces were branded with the verses of a poem that mocked the holy confessors. Therefore, the brothers were called “the Branded.”

The city prefect asked Saint Theodore to take communion with the iconoclasts just once, promising him freedom if he did. But the holy martyr replied, “Your proposal is the same as saying: ‘Let me cut off your head once, and then you may go wherever you wish.’”

After torture, the holy brothers were banished to Apamea in Bithynia, where Saint Theodore died around the year 840. Saint Theophanes survived until the end of the iconoclast heresy and died as Bishop of Nicea. Saint Theophanes was the author of many writings in defence of the Catholic Faith. The relics of Saint Theodore were transferred to Chalcedon, where they worked many healings.
Troparion — Tone 8

Champion of the Holy Faith, teacher of purity and of true worship, / the enlightener of the universe and the adornment of hierarchs: / all-wise father Theodore, your teachings have gleamed with light upon all things. / Intercede before Christ God to save our souls.
Posted by Jovan-Marya Weismiller, T.O.Carm. at 00:05