Fr Zed has some choice thoughts and a few strong words for Cupich's diktat claiming to 'implement' Traditionis Custodes. He does a great job of showing just what it really is.

There is no way… NO WAY… that this wasn’t all coordinated. 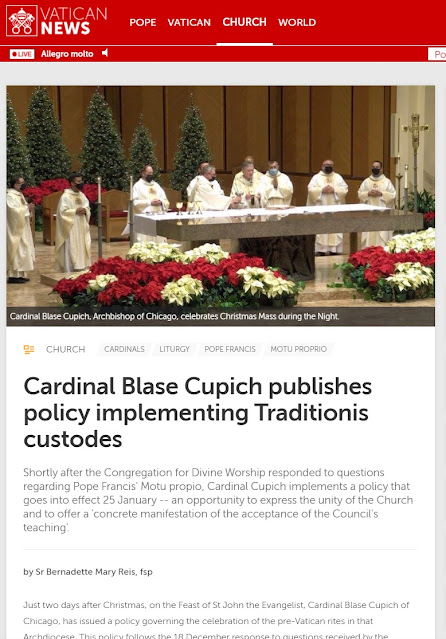 What could one expect from Cupich?  Really?   We knew that he would, eventually, issue something the cruelty of which would be exceeded only by its overreach.

The document is HERE.

I am not going to obliterate my buoyant yuletide spirit by mucking around with this for a long time.  It is an interconvertible truth that when it is necessary to respond to and to refute bad things like this, it takes ten times the number of words. The Chicago Plop is over 2000 words.   That in itself is a bit of a give away, because the more they write about why they are doing what they are doing, the less convincing it is.

Right on cue, like a bad cliché, the document – “Policy of the Archdiocese of Chicago for implementing Traditiones Custodes” – has several paragraphs of justification blah blah, laced with only the most convenient proof texts.

Some bullet points which will unquestionably reassure the faithful in Chicago that none of this is intended to marginalize them.   This all goes into effect on 25 January, which could give people time to find a new home in another diocese.

One wonders if anyone in that office has read Humanae salutis, which had in its core vision that the Second Vatican Council should be a super-Council, intended to reinterpret the past, a disruption in the continuity of Councils. No, wait.   What does Humanae salutis really say?…

Hac de causa, veluti intimae supernoque quodam instinctu ortae voci obtemperantes, matura iam esse tempora existimavimus, ut catholicam Ecclesiam universamque hominum familiam novo Oecumenico Concilio donaremus, quod eam viginti maximarum Synodorum seriem continuaret, quae per saeculorum decursum ad caelestis gratiae in christifidelium animis incrementum et ad rei christianae progressum tantopere valuerunt.   … (To translate for readers of the Fishwrap and Amerika… “For this reason, complying with – as coming from above – an inner voice of our spirit, we thought the time was now ripe to give the Catholic Church and the world the gift of a new ecumenical Council, as an addition to and a continuation of the series of twenty great Councils which throughout the course of centuries have been for the increase of heavenly grace in the souls of Christians and for the grace and of great of Christianity.”

The theological starting point for these people – across the board with the papalatrous (at least today – were it a different Pope they’d change their spots fast) – the Second Vatican Council is the interpretive lens to be used to interpret and, in fact, reinterpret all of tradition before it.  And it isn’t even the Council itself that is the interpretive principle.  It’s the indefinable SPIRIT of the Council that is the re-interpretive principle.  They declare by fiat what the Council means for every sphere of life and then shove that fiat down everybody’s throats.

I am not yet convinced that what resulted from Vatican II is what is described in either Humanae salutis or in Gaudet Mater Ecclesia.

I am sad for the people of Chicago today, because it is clear that your souls are not really the true motivating force in decisions being made: conformity is the goal.  You must not stray from their definition of the herd.

I am even sadder for people under those bishops out there who have been waiting for the Chicago boss to make a move; they know him to be one of the favored circle and its “safer” to be on his side.

What will result from this?

First, imposition of will can be undone by a successor with the snap of a bic pen.  That undermines authority and good order.

This will be resisted.  We shall see what happens then.

Some, will comply and even over comply, which will be taken by just about everyone as… limp, like the character behind a bad handshake.   Remember handshakes?

Meanwhile, against the tyranny of Traditionis custodes be a Custos Traditionis. Details HERE
Posted by Jovan-Marya Weismiller, T.O.Carm. at 14:08