'[I]f religions are willing to admit how wrong they have been about ... human nature, sexuality, justice, social ethics - why would any sane person believe what they had to say about some God or Spirit or Afterlife in the invisible other world?'

Over at The American Catholic, Donald McClarey posted this little gem: 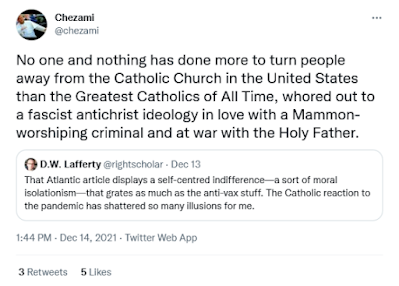 Heh.  As one can expect, his claim is false.  Even though it's a favorite scapegoat for leftwing Catholics, we all know the growing demographic of 'former Catholic' is not due to some post-Trump phenomenon.  The Catholic Church has been bleeding numbers for decades.  As have so many historical religions.  Generally, the more religious traditions try to accommodate modern, progressive ideologies, the faster they die.  Ross Douthat pointed that out some years ago.  He noted that every attempt by a monotheistic religion to accommodate modern liberalism results in that religion's demise.  In this helpful little post from a couple years ago, Brandon Vogt goes to the trouble of laying out the numbers.

Douthat is right.  That's because while we thought we were compromising and accommodating in order to evangelize the World, the World was zealously evangelizing the faithful.  Even when I was in school (c. 1980s), we learned Christianity was a religion started by Jesus, much in the same way Islam was started by Muhammad, or Buddhism by the Buddha.  That is, a secular anthropological spin on religion where religion is inspired, not revealed.  An enormous difference.

This last semester my son took a Classical Mythology course in college.  The same course that was offered when I went to OSU.  Back then, most of the Bible was taught as historically grounded fiction.  That is, no doubt there was a King David, likely an Abraham, and certainly a Jesus of Nazareth.  But the majority of events in their lives were made up fairy tales and fiction just like all religions.  After all, science has debunked the spiritual and miraculous, and scholarship has long shown all religions were simply invented by ancient man in lieu of modern research.

Today, however, my son learned that most of the Bible likely never happened at all.  Perhaps there were shadowy kings of ancient kingdoms, but no David or Solomon.  Those were fictional creations no different than Harry Potter or Luke Skywalker.  Jesus?  They weren't so radical as to take the new atheist spin that no such person existed.  Sure there was some obscure religious figure at that time, but later generations invented the whole 'you'll call His name Jesus' story along with all the rest.  Again, pure myth, fairy tales and fiction.  The next step in the World's great mission.

And this has been in more than our schools and colleges..  Our media and popular culture have been indoctrinating against the teachings of Christianity for decades.  By the time I came along, Christianity usually scored about a .350 in American society.  That is, about one third of the time a pop culture reference would allude to Christianity in at least a non-negative way.  The rest of the time?  Almost exclusively negative.

Should we be surprised, therefore that, contrary to Mark's silliness above, the main reason people are leaving the Catholic Church is THEY NO LONGER BELIEVE ITS TEACHINGS?  That is, they're apostates.  They're rejecting the Gospel and rejecting the existence of God Almighty.  They say in their hearts now that there is no God.  They have taken the Gospel and rejected it.  They believe the Bible no more than they believe The Hobbit.  They no longer believe there was a baby in a manger, a man walking on water, or a Messiah crucified by Rome.  THEY DON'T BELIEVE IT.

It has nothing to do with politics.  Look at how little the abuse scandal has to do with their rejection of the Church.  Less so the Church being vaguely 'too political.'  It's because they have been converted by the World, have rejected the Gospel and God, and are now believers in a godless, Christless reality.  That's why.

I can't help but think a big part of this is because the Church, and Christianity in general, has spent many generations meeting this Worldly evangelism with compromise, acquiescence, retreat or even surrender.  And that has done nothing but affirm what these modern generations have been taught: That all religion is made up stories and rules by people who make it up as they go for their own interests.

They might be happy to see the Church declare that it's open to nothing but pleasure beneath the waistline where transgenderism or gay sex is concerned.  But they also know the Church isn't doing this because a bunch of Catholic sages just emerged from years of pouring over ancient tomes and concluded a new development in understanding the Scriptures is warranted.  They know it's because the World stood up like a colossus, smacked the Church, the Church immediately soiled itself and then scurried to change yet another teaching or doctrine because the World said so.  That is why they are leaving.

To sum up: The generations in which Christians have accepted the World as right, and changed the Faith accordingly, haven't worked.  That's because it was never done in some objective vacuum of non-agendas, with the World just innocently seeking the truth.  The World all along (dare I say, Satan) was feverishly working to convert God's children away from Him, using whatever latest tools were available.  Each time the World demanded change and was met with a willingness to do so, it fed into the World's claims that religion has never been anything but made up tales and rules to begin with.

As one young wag asked, if religions are willing to admit how wrong they have been about everything visible in this world - human nature, sexuality, justice, social ethics - why would any sane person believe what they had to say about some God or Spirit or Afterlife in the invisible other world?  It's a fair question.  And one the Church had best start pondering before it and it alone ushers any more disciples of Christ out the door and into the outer darkness.

Now the Spirit manifestly saith, that in the last times some shall depart from the faith, giving heed to spirits of error, and doctrines of devils  1 Timothy 4.1