Part Two of the mini-biographies of the Kings of Spain. 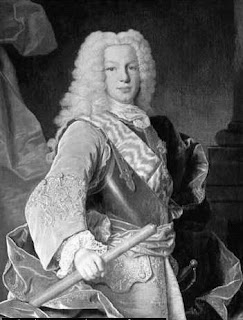 King Felipe V: Formerly the Duke of Anjou, after accepting the Spanish Crown the grandson of Louis XIV of France became King Felipe V and almost immediately had to deal with the War of the Spanish Succession (Queen Anne’s War). Felipe V was a bit of a ‘mixed bag’ as a monarch. The most significant thing he did which fails to impress me was his policy of centralizing power, mostly to the benefit of Castile and detriment of Aragon. This was partly because his grandfather in France (and Richelieu under Louis XIII) had made centralizing power rather fashionable but it was also because many nobles in Aragon opposed his taking the throne and he wanted to concentrate power in the more trustworthy nobles of Castile. He benefited from marrying the great Maria Luisa of Savoy but her tragic death far before her time left him heartbroken. His stripping Spain of her traditional local rights is the biggest detriment to his reign in my book but Felipe V should be given credit for his energy and ambition. A great deal had been lost just securing his throne and he tried very hard to restore Spanish greatness with campaigns to regain land in Italy and even a rather ill-conceived invasion of Scotland. None of it seemed to work out but at least he tried and while I disagree with much of what he did, I admire why he did it and I think he was genuinely trying to do what he thought best.

King Luis I: There is not much to say about Luis I. He was king for only a short time after the abdication of Felipe V before his death when his father again resumed the throne. He was unhappily married to a French princess who was rather crude, rather rude and wanted nothing to do with him. Still, as heir to the throne Luis was fairly popular and a great many hopes rested on his shoulders. After coming to the throne his advisors did their best to keep him away from the influence of his father whose policies they found too ambitious. However, his reign lasted only about seven months and he was only 17-years old when he died of smallpox. His life had been short and rather unhappy altogether with his stepmother making his early years miserable and his wife and courtiers making his teenage years miserable. The public was very disappointed and we can only guess what might have happened had he lived.

King Fernando VI: Since Felipe V resumed the throne after the death of Luis I, when the first Bourbon King of Spain died in 1746 he was succeeded by his younger son Fernando VI. He was shy, withdrawn and likely suffered from depression. His only joys seemed to come from music and the hunt. However, he was intelligent and first took steps to end the hold his stepmother and her Italian clique (Parma) held on the court. He put a halt to the ambitious plans of his father, made peace and remained neutral, trying to stay out of conflict and focus on reviving Spanish fortunes. He tried to improve commerce in the empire in America, came to an agreement with the Church, updated the Spanish navy and was a great patron of the arts, especially music. He tried to save money by cutting subsidies and proposing a progressive tax but finally dropped the plans in the face of the strident opposition of the nobility. He also took the first steps toward the formation of a national bank. Those who stood to lose money from his reforms naturally opposed him and they were not all good ideas but, if nothing else, the peace and stability of his reign helped Spain a great deal. He was a thoughtful monarch who worked hard to restore things without charging into battle at every opportunity.

King Carlos III: There is much to like and much to dislike about Carlos III. As Duke of Parma he conquered Naples and Sicily before becoming King of Spain and was very much of the “Enlightened Despot” trend. On the negative side, he expelled the Jesuits, was harsh with the Church, tried to get out debt by borrowing money (Joe Biden is older than he looks) and worst of all the man banned bull fighting. On the positive side, he built many magnificent palaces, protected natural resources and encouraged local industries in Spain and southern Italy. Seeing Britain tear apart the French empire alarmed him and he went to war with Britain which didn’t turn out to be such a good idea. However, during the American War for Independence he got his revenge. Spain again declared war on Britain and did very well, taking back almost all that had been lost and meeting all of their goals save for the retaking of Gibraltar which Britain managed to hold on to (and still does). Like the King of France he worried about setting a bad example for Spanish colonial subjects by indirectly helping the rebel Americans but, in the short term at least, Spain benefited greatly from the intervention. Education improved a great deal during his reign, power was further centralized and he gave Spain an official national flag, anthem and capitol city. Spain won many great victories under Carlos III, he just wasn’t my taste.

King Carlos IV: The younger son of Carlos III, as his elder brother was severely disabled and excluded from the succession (he died of smallpox at age 30) it was Carlos IV who succeeded to the Spanish throne in 1788. He had a very unfortunate reign. While he took care to maintain the dignity and prestige of the Spanish monarchy, he largely left government to his ministers. A kind man, he was perhaps too trusting and the government of Spain was riddle with intrigue and feuding that allowed the country to deteriorate. He was often dominated by his wife from the Parma branch of the Bourbon tree who was unpopular and the focus of many salacious rumors. He declared war on France because of the revolution and regicide but it was a disaster, gossip buzzed that many at court and even the Queen were really pro-French. Napoleon forced him into an alliance with France and he finally abdicated in favor of his more popular son. It is unfortunate in that Carlos IV was a good man with good intentions but his reign was nothing short of disastrous. What was unforgivable in Spanish eyes was one of his last acts; seeking help from Napoleon to restore himself.

King Jose I: Napoleon took the opportunity of a weak Spain and a feuding royal family to invade the Iberian peninsula and his forces promptly swept aside the dilapidated Spanish army and occupied the capitol. Napoleon forced Carlos IV and his son, Fernando VII, to each abdicate in favor of his elder brother Giuseppe Buonaparte, formerly King of Naples and Sicily. In 1808 he was proclaimed King Jose I of Spain but his rule was never widely recognized and he never even held complete control of the country as guerilla war soon broke out in opposition to the French presence. He tried to end privileges for the nobility and clergy but was not very successful though he did manage to shut down the Spanish Inquisition. The war against the guerillas dominated his government and he was given no real part in that. An idealistic sort, Jose I had many admirable qualities (and many dangerous and terrible ideas) but was not and was never going to be accepted by most Spaniards and he had no desire to be an occupying overlord and tried to abdicate several times but his brother would never allow it. Mockery turned to hatred when French repression began against the rebels even though King Jose had nothing to do with it. It is true though that some Spanish supported him, mostly those of the rabidly anti-clerical variety. Finally driven out by the Allies he ended up in America where some referred to him as the “King of New Jersey”.