Today is the Afterfeast of the Nativity, and the Feasts of the Holy Children, Who Were Murdered by Herod in Bethlehem and of Our Venerable Father Marcellus, Igumen of the Monastery of the 'Sleepless Ones'
✠✠✠✠✠

On December 28, the Afterfeast of the Nativity Feast. 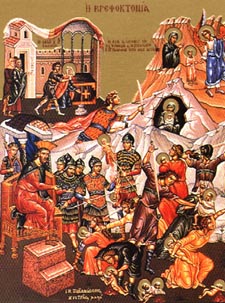 14,000 Holy Infants were killed by King Herod in Bethlehem. When the time came for the Incarnation of the Son of God and His Birth of the Most Holy Virgin Mary, Magi in the East beheld a new star in the heavens, foretelling the Nativity of the King of the Jews. They journeyed immediately to Jerusalem to worship the Child, and the star showed them the way. Having worshipped the divine Infant, they did not return to Jerusalem to Herod, as he had ordered them, but being warned by God in a dream, they went back to their country by another way. Herod finally realized that his scheme to find the Child would not be successful, and he ordered that all the male children two years old and younger at Bethlehem and its surroundings be killed. He thought that the divine Infant, Whom he considered a rival, would be among the dead children.
The murdered infants thus became the first martyrs for Christ. The rage of Herod fell also on Simeon the God-Receiver (February 3), who declared before everyone in the Temple that the Messiah had been born. When the holy Elder died, Herod would not give permission for him to be properly buried. On the orders of King Herod, the holy prophet and priest Zachariah was also killed. He was murdered in Jerusalem between the Temple and the altar (Mt. 23:35) because he would not tell the whereabouts of his son John, the future Baptist of the Lord Jesus Christ.
The wrath of God soon fell upon Herod himself: a horrid condition struck him down and he died, eaten by worms while still alive. Before his death, the impious king murdered the chief priests and scribes of the Jews, and also his brother, and his sister and her husband, and also his own wife Mariam, and three of his sons, and seventy men of wisdom who were members of the Sanhedrin. He initiated this bloodbath so that the day of his death would not be one of rejoicing, but one of mourning.
The Christian Church very rightly proclaimed these murdered children as Saints, because they died at an innocent age, and were, in some way, the first martyrs of Christianity. They may not have been baptized in water, but they were baptized in the blessed blood of their martyrdom.
Last but not least, the relics (or perhaps some) of the Holy Infants are found in Constantinople, in the Church of Saint James the Brother of the Lord, which was built by Emperor Justin. Most of their Holy Relics are at the Patriarchate of Jerusalem. Portions of their Holy Relics are also to be found in the Pantokrator Monastery on Mount Athos.
Troparion — Tone 1
As acceptable victims and freshly plucked flowers, / as divine first-fruits and newborn lambs, / you were offered to Christ who was born as a child, holy innocents. / You mocked Herod’s wickedness; / now we beseech you: / “Unceasingly pray for our souls.”
Kontakion — Tone 6
When the King was born in Bethlehem, the Magi came from the east. / Having been guided by the star on high, they brought Him gifts. / But in his exceeding wrath, Herod mowed down the infants as wheat; / lamenting that the rule of his kingdom had come to an end.
✠✠✠✠✠ 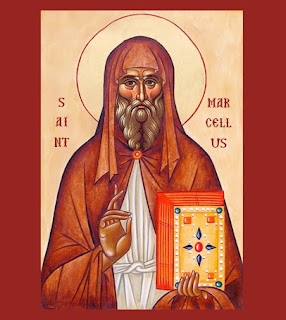 Saint Marcellus, igumen of the Monastery called “the Unsleeping Ones,” was a native of the city of Apamea in Syria. His parents were wealthy, but died when he was young. He received his education first at Antioch, and then at Ephesus. All his possessions left him by his parents he distributed to the poor, thereby sundering his ties to the world.
Under the guidance of an experienced elder at Ephesus, Marcellus entered upon the path of asceticism. He later went on to Byzantium to Saint Alexander, igumen of the monastery named “the Unsleeping.” The monastery received its name because in it psalmody was done constantly, both day and night, by alternating groups of monks. Saint Alexander accepted Marcellus and tonsured him into the monastic schema. Zealous in the works of watchfulness, fasting and prayer, the saint received great spiritual talents and the gift of clairvoyance. Marcellus foresaw the day of Abba Alexander’s death and his own election as igumen. However, since he was still young, he did not want to rule others. So he slipped out of the monastery to visit other provinces and other monasteries, where he received edification from the monks who lived there.
After the death of Saint Alexander, when Abba John had already been chosen as igumen, Marcellus returned to the great joy of the brethren. Abba John made Marcellus his own closest assistant. After John’s death, Saint Marcellus was chosen igumen of the monastery in spite of his own wishes, and in this position he remained for sixty years.
News of his saintly life spread far. People came to Marcellus from afar, both the illustrious and the common, rich and the poor. Many times they saw angels encircling the saint, attending and guarding him. With the help of God, the monastery of “the Unsleeping Ones” flourished. So many monks came to place themselves under the direction of Saint Marcellus that it became necessary to enlarge the monastery and the church.
Saint Marcellus received donations from believers for expansion, and built a beautiful large church, a hospital, and a hostel for the homeless. By his prayers the monk treated the sick, cast out devils and worked miracles. For example, one of the monks was sent to Ankara and fell ill. Being near death, he called out mentally to his abba. At that very hour Saint Marcellus heard his disciple in the monastery, and he began to pray for him. He who was sick recovered at once.
When a ship with his monks came into danger on the Black Sea, the saint calmed the tempest by his prayers. Another time, when they told him that a fire was raging at Constantinople, he prayed tearfully for the city, and the fire subsided as if extinguished by the tears of the monk.
John, the servant of a certain Arian nobleman named Ardaburios, was unjustly accused of something, and he hid out at the monastery to escape his master’s wrath. Ardaburios twice demanded that Saint Marcellus hand John over to him, but he refused. Ardaburios then sent out a detachment of soldiers, who surrounded the monastery, threatening to slay anyone who interfered with their mission. The brethren went to the abba, asking him to surrender John and save the monastery. Saint Marcellus signed himself with the Sign of the Cross, then boldly went out alone through the monastery gate towards the soldiers. Lightning flashed in the sky, thunder rumbled, and the Cross appeared shining brighter than the sun. The soldiers threw down their weapons and took to flight. Ardaburios, learning from the soldiers what had happened, was frightened, and because of Saint Marcellus he pardoned the servant.
Saint Marcellus peacefully departed to the Lord in the year 485. His faithful disciple Lukian grieved terribly over him, but on the fifth day after the death Saint Marcellus appeared to him and comforted him, foretelling his own impending end.
Troparion — Tone 8
By a flood of tears you made the desert fertile, / and your longing for God brought forth fruits in abundance. / By the radiance of miracles you illumined the whole universe! / O our holy father Marcellus, pray to Christ our God to save our souls!
Posted by Jovan-Marya Weismiller, T.O.Carm. at 00:05