Was Shakespeare a Catholic? A Book Roundup

Many years ago I read a fascinating book on this question. Unfortunately, I remember neither title nor author. I do remember the general outline of the argument however.

The author based his 'Yes' answer to the question on a few main points which included the undoubted fact that Shakespeare's father, John, was a devout Catholic, being recorded as having been fined for refusal to attend the services of the heretic Anglican sect, and based on his very Catholic 'Spiritual Will' which I posted, in its entirety here: John Shakespear's (sic) Will.

Another argument in favour of Shakespeare's Catholicism was his marriage license. I know that sounds odd, but in Elizabeth I's reign, there was no legal necessity to obtain a marriage license as long as the couple was married in the Church of England parish church of one of them. The Anglican heretics had retained the Catholic Canonical requirement of the Publication of the Banns of Marriage.

For those unfamiliar with the Banns, on the three Sundays or Holy Days preceding the proposed date of a marriage, the Priest would announce from the pulpit, 'I publish the banns of marriage between (Name of party) of the Parish of........ and (Name of other party) of this Parish. If any of you know cause or just impediment why these persons should not be joined together in Holy Matrimony, ye are to declare it. This is for the (first, second, third) time of asking.'

If the Banns were published, and the marriage took place in one of the couple's Parish Church no license was required. If, for some reason, the couple wanted to be married outside their parish(es), they could obtain a license for a not inconsiderable fee. This practice had begun in the 13th century, and the Anglicans had continued it in toto.

So why did Shakespeare need a license to marry Anne Hathaway? Especially at a cost of £5/-/-, equivalent to £1,480.17 today? Well, it happened that during this period of the English Deformation, there were still some elderly Priests, undoubtedly Catholic, who had kept a low profile during the turmoil, the martyrdom of many of their fellows at the hands of the bloodthirsty heretics, and the forcible deprivation of parishes, who remained in their parish churches.

Shakespeare, of course, would have been a resident of the Parish of Stratford-upon-Avon, whilst Hathaway lived in the Parish of Shottery, west of Stratford.  The author's research showed that, whilst the vicars of both parishes were Anglican heretics, there was a Parish nearby that still had its Catholic Pastor. Rather than having their marriage witnessed by a heretic layman playing dress up in violation of Canon Law, Shakespeare spent a small fortune to obtain a license to be married in valid and licit Canonical form.

The author also discussed the Catholic motifs in Shakespeare's works, references to purgatory, the Saints, etc., that would have been highly unlikely in the writing of a heretic.

In this article, Fr Longenecker gives a brief review of several, much more recent, books that address the same question. 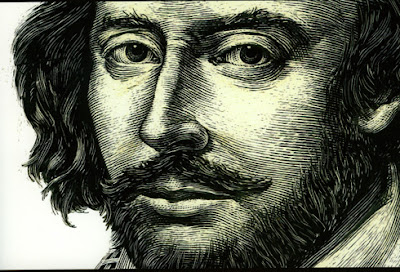 The question of Shakespeare’s Catholic faith was put in the spotlight not too long ago with a pretty cool television series called Will.
The program wasn’t the very best, but one thing it did right was to use Shakespeare’s Catholic faith as a motivating plot line.
The reason Shakespeare’s Catholicism is such an intriguing question is because of his context and time period. England during the reign of Elizabeth I and King James I was a Protestant police state. For a priest to say Mass was a capital offense. You had to attend the state church. Attendance was taken and fines and deprivation and finally imprisonment, possibly torture and death would follow. To shield or hide a priest was treason. You could be executed and many were.
So in the midst of this oppressive regime, so the story goes, Shakespeare was not only Catholic, but was hiding subversive Catholic messages in his plays. Who writes about this stuff?
If you want to learn more, here is a book round up on the subject;
Shadowplay by Clare Asquith is one of the leading proponents of the theory. Also, Shakespeare the Papist by the late Fr Peter Milward SJ–a very interesting character who was a student of C.S.Lewis and a missionary to Japan. Joseph Pearce’s The Quest for Shakespeare and Through Shakespeare’s Eyes.
Richard Wilson’s Secret Shakespeare and Ian Wilson’s Shakespeare the Evidence are wider studies, and for a general biography which is very objective about Shakespeare’s probable Catholicism, check out Peter Ackroyd’s biography of the bard.
A new book has also come across my desk which is A Tale told Softly by Robert T Morrison. Morrison is a lawyer who had done some very interesting detective work on The Winter’s Tale, promoting his theory that this late play of Shakespeare’s was a complex allegory about the state of the Catholic Church in England under James I.

Another new book coming out next month is Clare Asquith’s Shakespeare and the Resistance.

For lovers of books and lovers of Shakespeare…dig deeply!
Posted by Jovan-Marya Weismiller, T.O.Carm. at 15:14