This pervert deserves death! My Spiritual Director, Fr Matt Horvat (R+I+P) once said to me, 'I know it's a sin against charity, but these bastards should be out up against a wall and shot!' A friend pointed out, 'If you first made sure they had the opportunity to make a good confession it wouldn't be a sin.'

This article is not meant for the faint hearted! 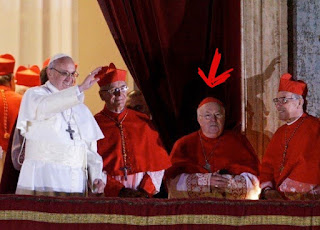 Don’t forget who was on the loggia next to him the day of his election:

That’s Cardinal Gottfried Danneels, leader of the St. Gallen Mafia that lobbied for Bergoglio’s election in 2005 and in 2013.

His other claim to fame, besides being a notorious Modernist and wrecker of the Belgian Church, is being caught on tape in 2010 pressuring a man to keep quiet about the decade-long sexual abuse he suffered at the hands of another bishop, one of Danneels’ closest collaborators in destruction.

He had been put out to pasture by Benedict but Francis not only brought him out on the loggia that night, he has given him important positions in the Bergoglian Revolution (just as he has done with his hero McCarrick’s boys Farrell, Tobin and Cupich).

No, I will not hold my breath.


From The American Conservative

On Tuesday night, I spent an hour on the phone with a man who has been identified in the media only by his first name, James. He is 60, a native of New Jersey, and one of Cardinal Theodore McCarrick’s molestation victims. McCarrick was a longtime friend of his family. James (whose full name I am withholding at his request, to protect a family member) told his story first to The New York Times, though he has spoken to other media outlets since the Times published his account on July 19.
From the Times story:

But James’ allegations — that he was repeatedly sexually abused as a minor — are the most explosive yet to be leveled against the cardinal, who is now 88 and living in seclusion in the Washington, D.C., area. On Monday, James filed a police report detailing his accusations against the cardinal with the Loudoun County Sheriff’s Office in Virginia, where he lives.
Cardinal McCarrick, through a spokeswoman, Susan Gibbs, said on Wednesday that he had not been notified of the accusation, so he could not respond. But she said he was committed to following the process the church has put in place for abuse allegations.


James said he had tried to tell his father that he was being abused when he was 15 or 16. But Father McCarrick was so beloved by his family, he said, and considered so holy, that the idea was unfathomable.
James was baptized by Father McCarrick on June 15, 1958, two weeks after he was ordained as a priest, records from Our Lady of Mount Carmel in Tenafly, N.J., show.
“He had chosen me to be his special boy,” James said in the phone interview, with his lawyer, Patrick Noaker, listening. “If I go back to my family, they tell me that it’s good for you to be with him. And if you go to try to tell somebody, they say ‘I think you are mistaken.’ So what you do is you clam up, and you stay inside your own little shoe box, and you don’t come out for 40 years.”

Since the Cardinal McCarrick story broke and your many blogs, I’ve deliberated contacting you.  I found the descriptions of “Uncle Ted” with seminarians particularly disturbing but familiar. You see, I was a “nephew”; however, I was not a seminarian. I was a minor.
When I read the story about James in today’s New York Times and saw the photo of McCarrick with his accuser, I felt I could have transposed either myself or my brother in the picture. McCarrick took my brother and me on the same trips. I was astounded to find an identical pattern in locations and experiences. We were taken to the fishing lodge in Eldred and the Tonga Room in San Francisco. During a trip to California I even recall my awe when I learned he’d just gotten off the phone with a “Dolores” who turned out to be Dolores Hope, Bob’s wife. As you remember, James also referred to McCarrick’s connection to Hollywood royalty including Bob Hope. Although I was never sexually abused or violated, his behavior was clearly inappropriate. Every description of unwanted touching rings true.
Like James, my family had a close connection with McCarrick. Cardinal McCarrick “adopted” various Catholic families as he rose to power. My family was one of these families, all with boys. He’d offer to take us on various trips in the tri-state area, an honor in the eyes of our devoted Catholic parents.  Often, I traveled with other “nephews.” Although his name was not revealed in the Times article, I may very well have known James.

The reader adds today, after reading James’s account in TAC:

I just read your post regarding James. Another Deja vu moment! When he’d visit for dinner, McCarrick’s drink of choice was beer and  tomato juice! In the post, the word “aura” was a perfect choice to  describe McCarrick’s effect on others, pre-Vatican II parents in  particular.
If you haven’t read it yet, look at today’s article in America  reporting Father Rossi’s harassment [by McCarrick]. One thing in the story was also  familiar: frequent inquiries into my weight and if I was “staying in  shape.”