The 7 Strongest Defenses Against the Anti-Christ, According to the Ven. Archbishop Fulton Sheen

I just posted The 12 Tricks of the Anti-Christ to Steal Souls, According to the Ven. Archbishop Fulton Sheen. Here are the Venerable Archbishop's seven hints on how to prevent the loss of your soul and those of your loved ones. 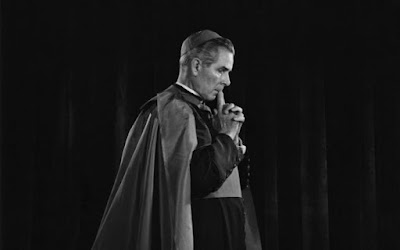 Every Catholic needs to know this!

We previously talked about the 12 tricks of the Anti-Christ, as explained by the Venerable Archbishop Fulton Sheen in a 1947 radio broadcast. In the same segment, he also explained the 7 best defenses a Catholic can make. This is just as important to know!

Here are the 7 defenses according to Archbishop Sheen:

1) Catholics ought to stir up their faith, hang a crucifix in their homes to remind them that they have a cross to carry.

2) Gather the family together every night to recite the rosary.

4) Make the Holy Hour daily, in the presence of our Eucharistic Lord, particularly in parishes where pastors are conscious of the world’s need, and therefore conducts services of reparation.

5) Those who have the faith had better keep in the state of grace and those who have neither had better begin to find out what they mean, for in the coming age there will be only one way to stop your trembling knees, and that will be to get down on them and pray.

6) Pray to St. Michael: O Michael, Prince of the Morning, who conquered Lucifer who would make himself a god. When the world once cracked because of a sneer in heaven, you rose up and dragged down from the seven heavens the Pride that would look down on the Most High.

7) Pray to Our Lady, saying to her: It was to you as the Woman that was given the power to crush the head of the serpent who lied to men that they would be like unto gods. May you who did find Christ when He was lost for three days, find Him again, for our world has lost Him. Give to the senile incontinence of our verbiage the Word. And, as you did form the Word in your womb, form Him in our hearts. Lady of the Blue of Heaven, in these dark days light our lamps. Give back to us the light of the world, that a light may shine, even in these days of darkness.

Here’s a recording of his radio broadcast: