Set Aside Ideology. The US Bishops Are Guilty of a Collective Failure

An incisive article discussing the way forward in the battle against the Lavender Mafia. 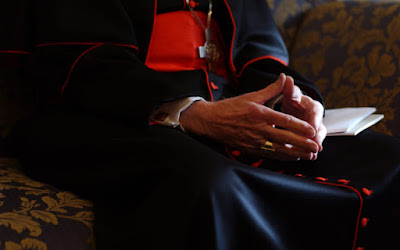 Rumours about McCarrick were widespread. Why did nobody act?


Since the allegations against Theodore McCarrick began to emerge over a month ago, one senior US churchman after another has disowned knowledge of his behaviour – some more credibly than others. They should have known. They should have made it their business to know.
The question we need to be asking, after McCarrick’s resignation today, is: why didn’t they know?
Bishops must have heard rumours: after all, two New Jersey dioceses had reached settlements over McCarrick’s actions, and as more than one writer has noted, stories about the then-cardinal had a wide circulation. The bishops needed to look into those rumours. They didn’t. In this, too, they failed: a truly execrable miscarriage of the duty to care.
This failure of the bishops is at once personal, touching each bishop singly, and corporate, touching them all together: they failed as one body – as a college. Some of them knew and did nothing. But those who simply let themselves be fooled are also guilty. And this applies to many cases besides McCarrick’s.
Catholics on every side of every issue in the Church are perfectly aware of the bishops’ corporate responsibility for the abuse crisis, and rightly appalled by their haste to plead ignorance and pretend responsibility only lies with the “few” who did the evil.
If some of the bishops have been lions in other fights, they are goats in this one.
Nevertheless, many of us are too quick to blame the prelates on the other side of the ideological divide. That temptation will prove fatal to any reform effort. Catholics must resist it. Bishops who have been our allies and standard-bearers – sometimes even our heroes – in other situations may turn out to fail us in this one. In fact, they already have.
Said differently: we can use this crisis as a proxy in our ideological battles, or we can fight this fight together, ruthlessly and without stint, until we have won. We cannot do both. If we choose the first path, we shall make ourselves the evildoers’ accomplices. The second path is the only one that offers hope. But it will also require us to smash our own idols.
Posted by Jovan-Marya Weismiller, T.O.Carm. at 15:16