Part of the Gay Network? Joseph Tobin Became Cardinal Thanks To McCarrick

I wonder for how many more gay and gay-friendly Bishops the vile pervert is responsible? Anything to spread the tentacles of the Lavender Mafia. 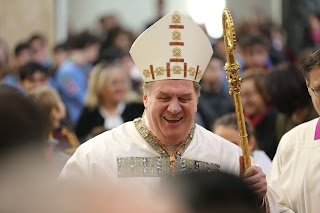 Two years ago Rocco Palmo wrote that pro-gayCardinal Joseph Tobin of Newark owes his career to Cardinal Theodore McCarrick.On July 27 Palmo revealed on Twitter that he is under fire by Tobin’s defenders for the story, now that McCarrick was accused of homosexual abuses.Palmo wrote that McCarrick sent in September 2016 a letter to Pope Francis seeking Tobin’s appointment to Newark. The information stems from two, directly involved sources.Before McCarrick's letter, Tobin’s name was never named as a candidate.Palmo adds that Francis named Tobin soon after McCarrick’s letter, in November 2016. In the same month, Tobin became Cardinal.Francis has a history of circumventing regular nomination processes in order to promote his liberal pro-gay buddies.
Posted by Jovan-Marya Weismiller, T.O.Carm. at 13:44