Whilst this is a poorly written article with several contextual errors, it is nonetheless horrifying. This heretic who supports the murder of the unborn did not 'le(a)d her Catholic church in Mass on Saturday', but what she did do raises grave questions. And I see no evidence that she was 'allowed' to do so. Unless the Pastor was complicit, as I discuss below, it seems she just barged in and took over!

What she did was to lead an unauthorised 'Communion Service' which leads me to ask several questions.

Canon Law is quite clear that this was a violation. Canon 938 lays down,

Therefore, I have to ask, how did this evil woman just waltz into a Parish Church and hold an unauthorised 'Communion Service'?

There seems to be only two possibilities,

Whichever it is, it is incumbent on the Ordinary to take action, but given the silence of most of the Irish Hierarchy and their refusal to 'confirm the brethren in the Faith' I doubt that anything will be done. 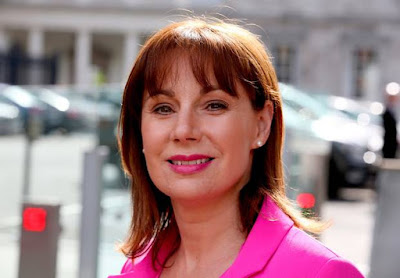 A prominent Irish abortion activist led her Catholic church in Mass on Saturday, despite advocating strongly against church teachings on the sanctity of life.
Irish Culture Minister Josepha Madigan was scheduled to give a reading during Mass at the Church of St. Therese in Mount Merrion, but when the priest did not show up for the service, she decided to lead it herself, according to the Irish Independent.
The pro-abortion politician reportedly led several hundred people in the Mass on Saturday evening.
Here’s more from the report:

It is understood Ms Madigan addressed the congregation from the altar, performing most elements of a normal Mass.
She did not read the Gospel or perform the consecration of the bread and wine, as these can only be carried out by a priest.
However, there was some pre-blessed bread in the church meaning Mass-goers were able to receive Communion. …
Local priest Fr Brian O’Reilly confirmed he was scheduled to be away and a replacement cleric did not materialise. He said he did not know the full circumstances behind Ms Madigan’s intervention as he was not present.

PRO-LIFE COLLEGE STUDENT? LifeNews is looking for interns interested in video creation. Contact us today.
Madigan claims that her faith is “extremely important” to her, but she repeatedly has ignored one of its most important teachings: Every human life is valuable. Instead, the pro-abortion politician pushed her country to strip unborn babies of all rights and allow abortion on demand.
A few days after the vote, Catholic Bishop Kevin Doran of Elphin urged Catholics like Madigan to attend confession if they voted to repeal the country’s pro-life Eighth Amendment, but some pro-abortion leaders scoffed at the suggestion.
Right now, Irish lawmakers are considering a proposal that would legalize abortion for any reason up to 12 weeks and up to six months for a wide variety of reasons after Ireland voted to repeal its Eighth Amendment, which protected unborn babies’ right to life, on May 25.
Catholic medical professionals and hospitals’ conscience rights also are being threatened. Earlier this month, Taoiseach Leo Varadkar said Catholic hospitals will not be allowed to opt out of aborting unborn babies. Under the government leaders’ plan, Catholic medical workers also will be forced to refer women for abortions if they are unwilling to abort unborn babies themselves.
Posted by Jovan-Marya Weismiller, T.O.Carm. at 15:46