Orwell: ‘History Stopped in 1936’ (and Everything Since Is Propaganda)

A few months ago, I posted More on Orwell, in which I said,


The man was a brilliant writer, incisive and witty at the same time. And he was the strangest sort of socialist! A socialist who appreciated old things, Victorian architecture in pubs, and religious belief, to name just two, as illustrated in these two essays. I'm sure I'll be posting more!

Here is an essay on the 'End of History' that has nothing to do with Fukuyama's 1992  The End of History and the Last Man. Fukuyama posited that the 'end of history' would be the triumph of of jacobin democracy and laissez-faire capitalism.

Orwell was much more farsighted. He saw that the 'end of history' would be totalitarianism. Even though the totalitarianisms of his time seem to have been defeated, today, we see the West falling into the 'soft totalitarianism' of the servile state and crony capitalism, in which the giant corporations own the 'democratic' legislatures and under supposedly laissez-faire capitalism are driving out their smaller competitors. Remember! Democracy is the best form of government money can buy! 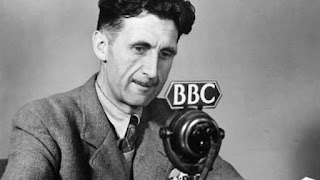 Most people are familiar with the plot of the The Matrix. The 1999 film portrays a dystopian future where the “reality” that people inhabit is actually a simulation created by machines intent on subjugating the human race.
The film has continued to resonate with many people because of a growing sense that our modern world is a largely simulated reality conditioned by technology and mass media.
As it turns out, many decades ago author George Orwell sounded the warning bell of modern man’s Matrix-like condition when he said, “History stopped in 1936”.
The source of this intriguing observation is not Orwell’s novel Nineteen Eighty-Four, but his 1943 essay “Looking back on the Spanish War.” It was written as a reflection on Orwell’s participation in the Spanish Civil War (1936-1939), in which he fought for the Republican side against the Franco-led fascists. According to Orwell, it was during the Spanish War that he became aware of the pervasive use of propaganda used to support the modern totalitarian regimes.

“I remember saying once to Arthur Koestler, ‘History stopped in 1936’, at which he nodded in immediate understanding. We were both thinking of totalitarianism in general, but more particularly of the Spanish civil war. Early in life I have noticed that no event is ever correctly reported in a newspaper, but in Spain, for the first time, I saw newspaper reports which did not bear any relation to the facts, not even the relationship which is implied in an ordinary lie. I saw great battles reported where there had been no fighting, and complete silence where hundreds of men had been killed. I saw troops who had fought bravely denounced as cowards and traitors, and others who had never seen a shot fired hailed as the heroes of imaginary victories; and I saw newspapers in London retailing these lies and eager intellectuals building emotional superstructures over events that had never happened. I saw, in fact, history being written not in terms of what happened but of what ought to have happened according to various ‘party lines’.”

Orwell’s above observations were inspired by the World War II era, when totalitarian regimes such as Nazi Germany and Communist Russia constituted a threat to freedom in the world. But since then, a number of thinkers have remarked that America and other Western countries are devolving into a “soft totalitarianism,” in which a pleasure-loving and increasingly lonely populace surrenders their freedoms to radical ideologies, which maintain their hold through education and a steady stream of propaganda.
As a result of the modern world’s reliance on propaganda, Orwell recognized that our access to the truth of past events—such as the Spanish Civil War or World War II—would be severely compromised:

“This kind of thing is frightening to me, because it often gives me the feeling that the very concept of objective truth is fading out of the world. After all, the chances are that those lies, or at any rate similar lies, will pass into history… Yet, after all, some kind of history will be written, and after those who actually remember the war are dead, it will be universally accepted. So for all practical purposes the lie will have become the truth.”

Orwell was not naive about history. He noted it was “the fashion” to suggest that history was essentially a long list of lies and recognized the likelihood that many writers of history “deliberately lied ... or unconsciously coloured what they wrote.” “But what is peculiar to our own age,” Orwell wrote, “is the abandonment of the idea that history could be truthfully written”; that there is a “body... of neutral fact on which neither [historian] would seriously challenge the other.”
If true, Orwell's reflections lead to some frightening conclusions, namely, that the propaganda of the past is now our “history”, that the propaganda we see in the news today will one day be studied by future generations as “truth”, and that reality stretches ever further beyond our grasp in an age of relativism and mass media.
Posted by Jovan-Marya Weismiller, T.O.Carm. at 16:33