According to The Black Book of Communism, by 1997, 94,000,000 people had been murdered by the Red Slavemasters. Fr Toufar was just one, but he died a hero's death at the hands of the commie murders.

Father Toufar, pray for us! 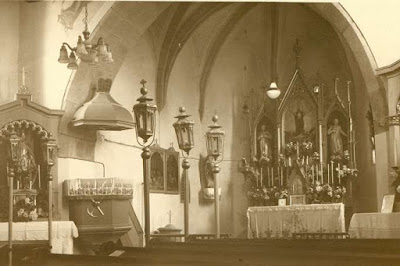 Rome, Italy, Feb 25, 2015 / 04:02 am (CNA/EWTN News).- A priest who witnessed to a miracle in communist Czechoslovakia in the 1940s was tortured and beaten to death for refusing to recant what his parishioners had seen. And now Catholics from the country are honoring his heroic virtue and pushing for him to be recognized as a martyr.
At a recent gathering in Cihost' commemorating the priest's brutal death, his current successor at the parish church says he's grateful for efforts to overturn the decades-long silence on atrocities against Catholics in the 20th century.
“Naturally, I am glad that the issue of Father Josef Toufar is starting to be resolved in which it will be shown how the political regime in our country actually was,” Father Tomas Fiala told CNA.
During the season of Advent in 1949 – the early phase of the communist era in Czechoslovakia – some parishioners told Fr. Toufar that they saw a cross at the altar in the church moving from one side to another several times. The event has come to be known as “the Cihost' miracle.”
To prevent the news of the phenomenon from going public, the secret police interrogated Fr. Toufar, demanding that he say that he had moved the cross himself.
The priest, however, refused.
In response, the police beat him so drastically that he was unable to speak, walk or sit. Later tortured until he would sign a document asserting his guilt, he died two months after the miracle took place.
After Fr. Toufar's death, the Church along with all religions were suppressed across the Soviet Union-led communist regime. The state was officially atheist and any accounts of miracles and those who spoke of them were treated in way to be erased from the record and the historical memory. The regime even filmed a documentary which tried to show that the Cihost' miracle was a forgery.
Despite their efforts, the account of the Cihost' miracle has survived.
And, now the damage is being reversed, said Fr. Fiala. “We would like to achieve that Father Josef Toufar is recognized as a martyr of the church.”
On the Feb. 22, an estimated 500 people gathered for Mass in his former parish of Cihost' to commemorate the 65th anniversary of Fr. Toufar's death. Cardinal Dominik Duka, archbishop of Prague, presided over the Mass. The church was so full with visitors from the entire country that they outnumbered the population of the village of Cihost'.
The event was seen as an act of support for the canonization cause of Father Toufar, which is still in the preliminary diocesan phase with approval from the Czech Bishops Conference.
Historian and postulator of the cause for canonization, Father Tomas Petracek, told Czech Radio that the Mass was “a satisfactory argument that our engagement in the beatification of Father Josef Toufar is not vain and it is not something made top-down, but it arises from people's veneration.”
The liturgy was followed by an exhibition of Fr. Toufar's former room and his belongings as well as a discussion on his life and the beatification process.
According to Cardinal Duka, Fr. Toufar was “an icon for the years of violent collectivization,” under the communist regime, he told the Czech Radio.
The presumed remains of the priest have been exhumed from a mass grave near Prague. Once verified by scientists, they are set to be brought to Cihost' during a July pilgrimage around the time of Fr. Toufar's birthday.
Corrected on Feb. 25, 2015 at 9:15 a.m. MST. Original article stated that Fr. Toufar had seen the miracle personally. A more accurate account is that he was told of the miracle by numerous parishioners and was tortured and killed for refusing to recant what they had seen.