Persecution of Nuns Getting to be a New Episcopal Hobby? French Novus Ordo nuns Get the FFI Treatment.

It is not only Tradition, as most people understand it, 'Extraordinary Form' Mass and all that goes with it, that Francis and his toadies are determined to destroy. In their quest to destroy the Body of Christ, root and branch, they are not only targeting the TLM, but any Order or Institute that wants to actually preserve and practice Catholicism.

The Franciscan Friars of the Immaculate and their female branch, the SMOM, the Canons Regular of St John Cantius, and now these Sisters, the list keeps growing!

And it seems that the Bishop involved, an appointment of His Holiness Pope Benedict XVI, has been, as Miss White puts it, 'bergoglianized'. Another 'conservative' anxious to curry favour with the anti-Catholic heretics in Rome.

From What's Up With Francis Church


As I’m sure we all know, there’s nothing a bully likes more than an easy target. And if you’ve been in the Catholic Church more than five minutes you will understand how bishops are affected by the Vatican’s fine example.
These days, it seems if you are a canonically recognised religious community who wants to have things even a little bit more traditional, you can run, but apparently you cannot hide. Especially if your bishop is broke and you own a lot of property. Something the Petites Sœurs de Marie Mère du Rédempteur are finding out these days.
In February, Riposte Catholique published a circular letter from the sisters to their friends, saying that the were being “persecuted” in a way similar to that of the Vatican’s treatment of the Franciscans of the Immaculate.
The case is complex, but bears many points in common with the way the Vatican’s Congregation for Religious is dealing with those communities whom the progressive “New Paradigm”ists consider recalcitrants. Taking a closer look might give some insight into what other communities might expect if they dare to stand up for the integrity of their own charisms.
It is also noteworthy that this community is emphatically not “Traditional,” but merely what we used to call “conservative”. Their lay association (on Facebook here), start the discussion with a declaration of the sisters’ being “totally in line” with the “conciliar directions” of the Church since Vatican II; we see again that the comfortable “conservative” middle ground, the “reasonable compromise” of JPII-era Catholic conservatism, has evaporated.
This little community of novus ordo sisters – there are now 37 of them –  were founded in France in 1949, “dedicated to supporting priests, parishes and families” and the pursuit of the sanctification of the members of the community. They work in parishes doing lay formation and looking after old people in four nursing homes. The community is based in the diocese of Laval and has a presence in neighbouring archdiocese of Toulouse.

“Through this apostolate, the Institute ensures the protection and respect of the end of life, accompanying Christians to the elderly until their natural death. They are also concerned with supporting and training families in Catholic doctrine and spiritual life.” They are appreciated locally for their devotion to “traditional spirituality.”
Notably, in 2012, the sisters returned to the wearing of their original habit, 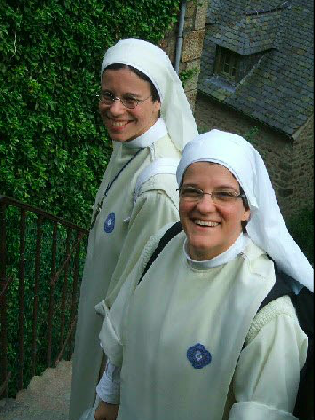 from the modified version they’d been wearing since The Changes…
…that back-of-the-head-with-little-tuft-of-hair-showing veil we’ve all become so used to since the Asteroid. (If anyone tells you that the “form of dress” is an irrelevant side issue ask them why it’s not OK to go back to the original habits. Guess what; symbolic garments symbolise things.)
According to Riposte Catholique: “Bishop Thierry Scherrer, bishop of Laval since 2008, yet reputed to be a ‘classic,’ seems to have bergoglianized. He is uncomfortable with the presence of the seminar of the Community Saint-Martin, on his diocese, in Évron, and does not appreciate the too traditional way of the Little Sisters to live in spirit of reparation and contemplation and felt called to become their ‘Refounder’.”
Apparently, like Bergoglio, the bishop gets “worried” when a tradition-minded religious order starts getting too many young eager and faithful vocations and becomes well loved by the laity. In this case the bishop’s response to this “worry” was to delate his own sisters to Rome.
According to the lay organisation, (that you can find here on Facebook) following a merger of the sisters’ retirement homes with another [order] in Mayenne, Bishop Scherrer found himself an ex-officio member of the board of directors of the civil management association of these assisted nursing homes.” He reportedly began issuing orders about the management of these homes, despite his lack of experience in the field. Naturally these decisions met with resistance, and the bishop’s response was to initiate a “canonical visitation” on the order, an action that in our current epoch has become tantamount to a declaration of war. His two visitators, unsurprisingly, gave him a report on the life of the sisters that found them to be too traditional – accusing them of “sectarian excesses,” objecting to their return to the traditional habit and their rejection of modern media in the enclosure – which was then sent on to the Roman Congregation for the Institutes of Consecrated Life of Cardinal Joao Braz de Aviz, of odious ill fame. (One has to wonder, while reading the story that follows, whatever happened to the good cardinal’s commitment to “dialogue”…)
The result of this delation was that the Congregation “suspended the Council of the Congregation and sent the Superior General and the Mistress of Novices into exile to distant monasteries for an indefinite period.” This left three apostolic commissioners, appointed by Rome, in charge of the congregation. An appeal by the sisters for a new canonical investigation was refused by the Congregation.
In a letter of February 28, 2018, “the Dicastery for Religious did not give the sisters the freedom to choose what seemed to them the best for their Institute and they were invited on pain of ‘dismissal of the Institute,’ to welcome the Commissioners appointed by this same Dicastery.”
These Commissioners included Sr. Monique Colrat, Superior General of the Congregation of Dominican Sisters of the Presentation of Mary…