LGBT Agenda Is a Demonic Attack on the Family, Cardinal Sarah Warns U.S.

His Eminence did not say anything we didn't already know, but it's nice to see a Cardinal of the Holy Roman Church agree with us! 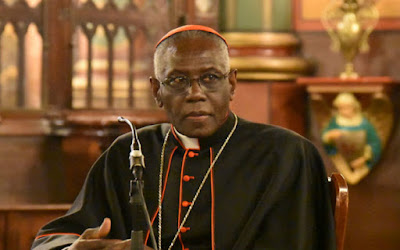 Same-sex marriage, transgenderism, and divorce are demonic attacks on the family, Cardinal Robert Sarah warned in his keynote speech for the National Catholic Prayer Breakfast in Washington D.C. early on Tuesday, May 17th, 2016.
“This is about defending ourselves, children, and future generations” he said, according to LifeSiteNews, “from a demonic ideology that says children do not need mothers and fathers. It denies human nature and wants to cut off entire generations from God.”
He listed examples of this evil ideology: “Do we not see signs of this insidious war in this great nation of the United States? […] The legalization of same-sex marriage, the obligation to accept contraception within health care programs, and even ‘bathroom bills’ that allow men to use the women’s restrooms and locker rooms.”
“Should not a biological man use the men’s restroom? How simpler can that concept be?”
He also pointed to divorce and cohabitation as destructive, especially for children.
“The rupture of the foundational relationships of someone’s life – through separation, divorce, or distorted impositions of the family, such as cohabitation or same sex unions – is a deep wound that closes the heart to self-giving love [unto] death, and even leads to cynicism and despair.”
“These situations cause damage to the little children through inflicting upon them a deep existential doubt about love. They are a scandal – a stumbling block – that prevent the most vulnerable from believing in such love, and a crushing burden that can prevent them from opening to the healing power of the Gospel.”
He lamented that new problems are compounding the old ones. “Sadly, the advent of artificial reproductive technologies, surrogacy, so-called homosexual ‘marriage,’ and other evils of gender ideology, will inflict even more wounds in the midst of generations we live with.”
“This is why,” he concluded, “it is so important to fight to protect the family, the first cell of the life of the Church and every society.”
His speech is reported to have been received with thunderous applause from the audience. The program also included Speaker Paul Ryan, Fr. Paul Scalia (son of the late Supreme Court Justice Antonin Scalia), and Sr. Constance Veit from the Little Sisters of the Poor.
Posted by Jovan-Marya Weismiller, T.O.Carm. at 23:13