Why am I not surprised that Killary Clinton thinks that Ireland 'legalising' the brutal murder of the unborn is a good thing? In common with her 'progressive' friends, she is a card carrying member of the Culture of Death. She hates Life and she hates the Church which is the Body of Him Who is the Way, the Truth, and the Life! 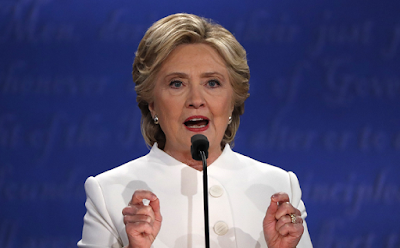 Former presidential candidate Hillary Clinton is in Ireland giving speeches, and during her address, she thanked the European nation for voting to legalize abortion. The Irish people recently voted to overturn their Eighth Amendment legal protections for unborn children, paving the way for abortion legalization through 14 weeks but probably longer in some instances.
Clinton has long thought that abortion should be a fundamental human right and she saidthat such rights are under attack.
“We are living through an era when fundamental rights, civic virtue, even facts and reason are under assault like never before,” she said.
In her address, she thanked Irish Millennials for voting for legalized abortion by large margins.

During her 30-minute address, Mrs Clinton told an audience of about 400 in a lecture theatre that she had followed last month’s referendum and “saw Irish people flying home to vote from all over the world”.
“Airports were mini-rallies with cheering and colourful banners greeting citizens who came as far away as from Japan, Australia and, of course, America,” she said.
“On the day of the vote one of the strictest laws in the world was overturned with nearly 87 per cent of 18- to 25-year-olds voting ‘yes.’
“It was an example of a government placing that decision before the people and grassroots activism leading to an outcome that represented the voices and views of the Irish people.”

Clinton made no mention of concerns that Christian hospitals and doctors may be forced to kill unborn babies in abortions or make abortion referrals. Irish leaders claimed legalizing abortion was about “choice,” but now they are insisting that Catholic hospitals be forced to do them.
And Clinton made no mention of how Irish politicians are pushing to ensure children with Down syndrome are targeted in abortions. They are considering legislation that could allow deadly discrimination of unborn babies with disabilities like Down syndrome. The proposal would legalize abortion for any reason up to 12 weeks and for a wide variety of circumstances up to 24 weeks.
Irish Minister for Health Simon Harris repeatedly has claimed his proposal does not allow abortions on the ground of a disability. But Harris said he would oppose an amendment to prohibit abortions for that very reason.
That’s nothing to celebrate.