This woman is not some fringe atheist! She is a former Uachtarán na hÉireann (President of Ireland). How low Ireland has fallen! Bunreacht na hÉireann (the Constitution of Ireland) begins,


In the Name of the Most Holy Trinity, from Whom is all authority and to Whom, as our final end, all actions both of men and States must be referred,
We, the people of Éire,
Humbly acknowledging all our obligations to our Divine Lord, Jesus Christ, Who sustained our fathers through centuries of trial,...


Article 44 of the Constitution originally read,


and whilst the second section was repealed by the Fifth Amendment in 1973, the first remains part of the Constitution.

Originally, the Constitution contained no mention of abortion. Of course, in 1937, no civilised country allowed it and the very idea that a Christian country would 'legalise' the murder of the unborn was almost literally unthinkable. However, by 1983 it had become obvious that not only was the idea thinkable, but previously Christian countries like the United Kingdom had passed laws allowing it.

As written, the Constitution pledged the State to protect the family, outlawed divorce, pledged to 'endeavour to ensure that mothers shall not be obliged by economic necessity to engage in labour to the neglect of their duties in the home', because 'the State recognises that by her life within the home, woman gives to the State a support without which the common good cannot be achieved.' Most of the provisions on the family remain, but sodomite 'marriage' has been recognised, divorce legalised, and other perversions introduced.

How did a Catholic country with a Constitution almost 100% in conformity to the Social Magisterium of the Church descend so far into the evil abyss of the Culture of Death? As the friend of mine who posted this article on Facebook said, 'Satan is in Ireland!' Of course, he's everywhere, but it has become obvious over the last few years that in Ireland he is winning the battle!

St Oliver Plunkett and all ye Blessed Irish Martyrs, Pray for Ireland! You shed your blood to keep Ireland free of the evil of heresy, now pray to free her from the corruption of the Culture of Death! 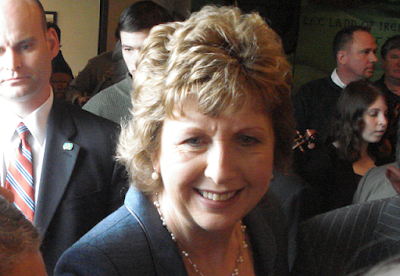 Former Irish president Mary McAleese criticized infant baptism and the Catholic Church this week, while supporting the deadly abuse of children in the womb through abortion.
Speaking to the Irish Times, McAleese claimed infant baptism imposes “obligations on people who are only two weeks old.”
A radical abortion activist, the political leader has repeatedly attacked the Catholic Church and others who believe unborn babies should have a right to life. Ironically, she expressed horror at the harmless act of baptizing of an infant with water while celebrating abortion – the violent destruction of infants in the womb.
Breitbart reports more:

Echoing professional atheist Richard Dawkins, who has argued that labeling children as possessors of religious beliefs is “always a form of child abuse,” McAleese said that babies baptized in the Catholic Church are “infant conscripts who are held to lifelong obligations of obedience.”
Early Baptism breaches fundamental human rights, she said, adding that you cannot impose obligations on little children and then “say to them at seven or eight or 14 or 19 ‘here is what you contracted, here is what you signed up to’ because the truth is, they didn’t.”
McAleese said that the current model of Baptism “worked for many centuries because people didn’t understand that they had the right to say no, the right to walk away.”

Last week, McAleese also blasted Catholic Bishop Kevin Doran of Elphin who urged Catholics to attend confession if they voted to repeal the country’s pro-life Eighth Amendment.
The Irish Independent reports McAleese flouted the bishop’s urging and openly touted her vote to allow the legalized killing of unborn babies in Ireland. She made the statements at a weekend conference organized by the Catholic lay group We Are Church Ireland in Dublin.
Committed Catholics have been some of the strongest advocates for unborn babies in Ireland and across the world. They continue to fight tirelessly to save babies from the violence and destruction of abortion.
For decades, the Eighth Amendment protected unborn babies and mothers equally in Ireland by recognizing that both are valuable human beings who deserve a right to life. More than 100,000 Irish unborn babies and mothers were spared from the pain and death of abortion.
Ireland also was one of the safest places in the world for pregnant mothers and their babies, with one of the lowest maternal mortality rates in the world.
Now, the fear is Ireland’s abortion law will mirror Britain’s, where one in every five pregnancies there ends in abortion each year. In Britain, abortion is permitted until 24 weeks of pregnancy.
Posted by Jovan-Marya Weismiller, T.O.Carm. at 14:44