Wish You Were Here: Mike Voris, Just Man up and Apologise.

You may have noticed that I've begun posting videos and articles from Michael Voris' Church Militant and The Vortex. This article from Hilary White should explain why I haven't in the past.

Until the past couple of weeks, Mr Voris was, whilst not a 'defender' of Francis, definitely not a critic either. The editorial policy of CM was that the Pope was above criticism. To make matters worse, they attacked those who did criticise him.

Miss White calls on him to admit, publicly, that he was wrong and we were right and to apologise to those he attacked.
From What's Up With FrancisChurch 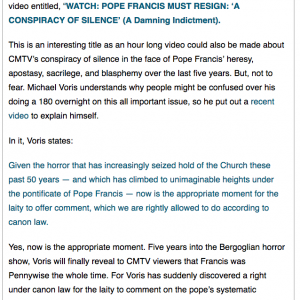 Because this s— isn’t cutting it.
Apologise or I’ll post the photos I have on file from the dinners at Garda.
I swear, I’ll do it. Don’t think I won’t.
Posted by Jovan-Marya Weismiller, T.O.Carm. at 15:41