It seems that Whirly Wuerl, now a/k/a 'Wuerldo' has disappeared. Rumour has it that he's in hiding until Francis can get him out of the country. What's Francis afraid of? That Wuerl might spill the beans on the whole evil Den of Perverts Francis has been coddling? 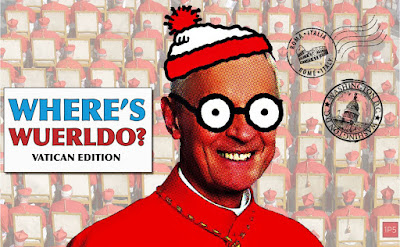 It seems that Cardinal Donald Wuerl, archbishop of Washington, D.C. and heir to Not-Cardinal Theodore McCarrick, has disappeared.
Yesterday, both Church Militant and LifeSiteNews reported that Wuerl was in hiding while “final plans for sneaking him out of the country are executed,” according to Michael Voris.
From Claire Chretien at LifeSiteNews:

According to Voris, who says he received this information from reliable sources, the U.S. Department of Justice (DOJ) may open up a RICO case against the Catholic Church. RICO, the Racketeer Influenced and Corrupt Organizations Act, is a 1970 anti-organized crime, anti-racketeering law.
Because Wuerl would be a prime target of such a case, according to Voris, Pope Francis wants him out of the country lest he reveal “all he knows” because any potential DOJ case would lead to the Vatican.
“They are trying to sneak him out of the nation under Vatican diplomatic secrecy,” said Voris, noting Wuerl has backed out of a number of public events after the Pennsylvania news broke, and speculating he may be hiding at a hotel in the nation’s capital. Voris said priests of the archdiocese received a letter from Wuerl saying he was looking forward to seeing them during Labor Day weekend.

Church Militant sources in D.C. confirm that Wuerl has completely gone off the grid — his cell phone has been shut off, he has not been in his private apartment for a number of days, all public appearances have been canceled and he has not even shown up for the weekly private confessions he offers for his priests.
Insiders believe he is holed up in a hotel in the greater D.C. metropolitan area while final plans for sneaking him out of the U.S. are executed.
Following the 2002 Boston Globe revelations of the homosexual clergy child sex abuse scandal there, Cdl. Bernard Law of Boston departed the United States for Rome and never returned to the country, shielding him from any possible prosecution.

Voris did not, however, explain anything about the “reliable sources” that had revealed this information to him. At the time of the Church Militant report, there was no outlet corroborating the story except for the rehash at LSN. Nevertheless, rumors continued, and I saw at least two different people on social media claim that Wuerl is already in Rome.
Today, Catholic journalist (and Cardinal Wuerl’s apparent personal nemesis) George Neumayr wrote: Monsignor Ferrari@ServizioVatican
Rumours in Rome earlier, Wuerl is here but maybe CM is right, that he is hiding, fleeing arrest possible arrest and about to come here.
If he is going to be arrested, this will be a tremendous blow to Francis' regime
Christine Niles@ChristineNiles1
Vatican plans escape hatch for Wuerl to escape federal prosecution. https://www.churchmilitant.com/news/article/breaking-news-exclusive-wuerl-bombshell …

Twitter Ads info and privacy
The fact is, nobody seems to know where Cardinal Wuerl is – though he is, according to a letter sent to the priests of his diocese, supposed to be present with them at an event on Labor Day.
This would be extremely humorous if it weren’t all so serious. Nevertheless, I find myself amused at the absurdity of it all. And while I chose the “Where’s Wuerldo?” approach to this latest bizarre chapter in ecclesiastical leadership, my friend Michael Hichborn of the Lepanto Institute came up with an equally good motif: Feel free to use either if the Spirit – as Francis might say – moves you.