The evidence keeps piling up! He has lost all moral authority to govern the Church!

ROME, Italy, August 29, 2018 (LifeSiteNews) – Pope Francis gave a Vatican apartment to a priest who was later caught hosting a drug-fueled homosexual orgy in that same apartment despite being warned about the priest’s grave problems, a highly placed Vatican source told LifeSiteNews in an exclusive interview.
It was Francis himself, the source said, who made sure that a homosexual secretary of his friend Cardinal Francesco Coccopalmerio would obtain a privileged apartment in the Vatican.
Cardinal Coccopalmerio, then president of the Pontifical Council for Legislative Texts, and one of Pope Francis’ closest collaborators and ardent supporters, had spoken in 2014 about the “positive elements” in homosexual relationships. 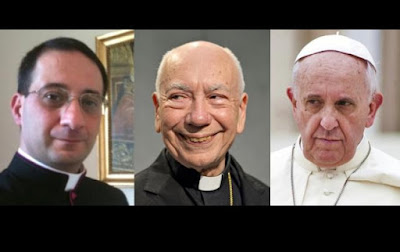 Monsignor Luigi Capozzi (left) is secretary to Cardinal Francesco Coccopalmerio (center) who is a close collaborator with Pope Francis.
Vatican police arrested Coccopalmerio’s secretary Monsignor Luigi Capozzi, in a raid last year after they broke up the cocaine-fueled homosexual party in the Vatican apartment next to St. Peter’s Basilica.
Vatican gendarmerie had conducted the raid on the homosexual orgy after tenants in the building complained repeatedly about constant traffic of visitors at all hours of the night to the building - which was used by various high-ranking churchmen, including prefects, presidents and secretaries to the Roman Curia.
LifeSiteNews’ source in Rome said that then Prefect of the Congregation for the Doctrine of the Faith (CDF) Cardinal Gerhard Müller had tried to get an apartment for one of his secretaries at the Palazzo del Sant'Ufficio, where the CDF is also located. There was an apartment free at the time of Müller’s inquiry, and the cardinal submitted a request for his secretary.
But then, the source said, Pope Francis informed Cardinal Müller via a personal note that this apartment was not available for his secretary because Cardinal Coccopalmerio needed it for his secretary Luigi Capozzi.
“That was then the same apartment which – in the summer of 2017, and after complaints from neighbors – was raided by the police,” the source said, “in order to end a homo party with large amounts of cocaine, which Capozzi himself – at the Palazzo del Sant'Ufficio – had organized for his homosexual friends.”
LifeSiteNews had inquired with another well-informed Vatican source about the then-breaking Viganò story and the archbishop's allegations that Pope Francis knew of Archbishop McCarrick's serial abuse of seminarians and priests.
In the course of the discussion of Vatican handling of sexual abuse claims, the source stated that the pope had been made aware of issues with Capozzi, however, he let him have the apartment anyway.
“Pope Francis had been informed by someone about Luigi Capozzi's problems,” the source said, “but he gave him anyway the apartment.”
Confirming Viganò's claim of prior restrictions placed upon then Cardinal McCarrick, that initial source also told LifeSiteNews as well that several people in the Vatican knew about the restrictions imposed by Pope Benedict XVI.
The source said further that Francis’ abrupt dismissal of Müller as CDF prefect in June 2017, along with Francis’ earlier similarly abrupt removal of three CDF priests, stemmed from disagreements as to the handling of abuse cases.
Word of the pope obtaining a privileged Vatican apartment for the homosexual secretary of his friend while having been told of concerns with the priest comes as the pontiff continues to decline comment on the bombshell Viganò testimonyimplicating the pope and several senior prelates in covering up Archbishop Theodore McCarrick’s alleged sexual abuse of seminarians and priests.
Posted by Jovan-Marya Weismiller, T.O.Carm. at 19:01