Wendell Berry’s “What Are People For?”

Wendell Berry is an 'agricultural intellectual' very much in the vein of the Southern Agrarians, a champion of tradition, localism, sustainable farming, and pretty much all the 'crunchy con' positions.

This is a book I intend to read and write my on review on as soon as I can afford it. Being a retired Old Curmudgeon gives me plenty of time to blog, but very little disposable income with which to buy books to review! 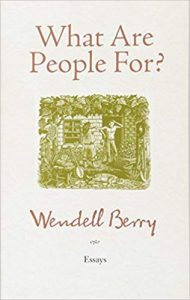 “We should love life,” Dostoyevski once said, “more than the idea of life.” It is this concreteness, this rootedness, that seemingly inspirits the life and writings of Wendell Berry, whose most recent collection of essays, What Are People For?, further establishes him as one of the most disquieting yet compassionate and sane commentators on what Berry himself calls “the modern tragedy.” In this book, Berry once again extols many of the same virtues—family and community, individual responsibility, meaningful work and measured action. Yet as one reads the essays an important underlying and unifying theme—the struggle to avoid abstraction—emerges, a theme which reveals perhaps Berry’s greatest concern about modern life. By continually reiterating the importance of concrete actions and concrete language, Berry once again warns us of the dangers of allowing corporations, governments, schools, churches, or causes to lessen our humanity by defining us and our responsibilities in terms of a subsuming abstraction.
The French philosopher Gabriel Marcel uses the phrase “the spirit of abstraction” to describe “the inability to treat a human being as a human being, and for this human being the substituting of a certain idea, a certain abstract designation.” It is, it seems, against this “spirit of abstraction” that Berry most persistently warns us, for one need only add the words “farm” and “community” to the Marcel quote to get at the heart of not only this latest work but also many of Berry’s other writings.
What can happen to a farm when it becomes “a certain abstract designation” is made clear in this work’s opening and prefatory poem “Damage,” a recounting of Berry’s misguided attempt to build a farm pond on an unsuitable site. When the project fails, Berry realizes that he has himself played out “the modern tragedy.” By relying on generalized expert advice instead of personal knowledge, he makes of his farm an abstraction, and although Berry writes that “[n]o expert knows everything about every place, not even everything about any place,” it would seem that the lesson of the failed pond, as of most failures by experts, is that the particular is the very thing that experts do not know. Later, in the essay “An Argument for Diversity,” Berry states that “[t]he challenge to the would-be scientists of an ecologically sane agriculture, as David Ehrenfeld has written, is ‘to provide unique and particular answers to questions about a farmer’s unique and particular land.’” For various reasons, primarily financial, it is a challenge that is not being met.
Just as the farmer can do damage by losing sight of the particular, however, so too can the consumer, on whom some of the blame for our current agricultural problems must be placed. Early in the essay “The Pleasures of Eating,” Berry argues for eating as more than an abstract act of consumption:

That feminists or any other advocates of human liberty and dignity should resort to insult and injustice is regrettable. It is equally regrettable that all of the feminist attacks on my essay implicitly deny the validity of two decent and probably necessary possibilities: marriage as a state of mutual help, and the household as an economy.
Marriage, in what is evidently its most popular version, is now on the one hand an intimate ‘relationship’ involving (ideally) two successful careerists in the same bed, and on the other hand a sort of private political system in which rights and interests must be constantly asserted and defended. Marriage, then, has now taken the form of divorce: a prolonged and impassioned negotiation as to how things shall be divided. During their understandably temporary association, the ‘married’ couple will typically consume a large quantity of merchandise and a large portion of each other.

The irony here, of course, is that enslavement of any sort, whether by another person, by a machine, or by an idea, is fundamentally contradicted by all that Berry espouses. Indeed, enslavement of another sort is what characterizes these feminist ideologues who fail to see the unfairness (and irony) of expecting others to sacrifice personal choice to political correctness.
Berry’s original essay and his response to the Harper’s letters should be required reading in all freshman English classes (and beyond, of course); however, it is likely that only the original essay will be taught, probably as an example of how blind a writer can be to the implications of his own words. Perhaps such pessimism is unwarranted, for Berry’s other writings are beginning to make their way into that great marketplace of ideas—the freshman reader, and, with our country’s growing ecology movement, general interest should continue to increase, also. That Berry is being read by more people is of great importance to us all, for we will ignore him at our own peril. Because our lives are so circumscribed by “the spirit of abstraction,” it is especially important that this latest collection be read and contemplated, not only because we share Berry’s love of “light, air, water, earth; plants and animals; human families and communities; the traditions of decent life, good work, and responsible thought; the religious traditions; the essential stories and songs,” but also because we must constantly be reminded of what Paul Johnson calls “the utter heartlessness of ideas.”
This review was originally published in Southern Partisan (1990) and is republished with gracious permission from the Abbeville Review (August 2018).
Posted by Jovan-Marya Weismiller, T.O.Carm. at 14:02